A Cinema House in Poona

A Cinema House in Poona

The motion pictures came to Poona with the coming of electricity in 1910. The first cinema house to be set up was the Napier Cinema in the Poona Cantonment. The Napier started showing silent movies to paying audiences in a shed-like structure, probably the first one in Poona. 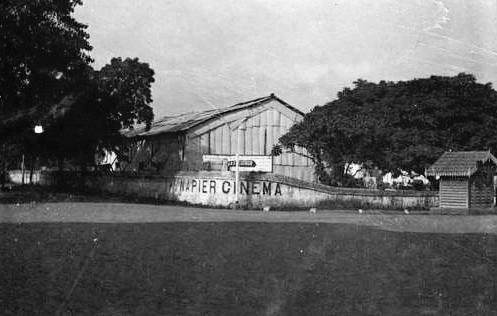 With time and waxing popularity, the Napier was refurbished by 1919, or thereabouts, into a fairly well-boned neo-Classical building, with timber framing and a stone gable, punctuated with a Baroque-ish front. The Napier was very popular, and is mentioned in several accounts of Poona at the time. One peculiar feature was the screening of (what we today call) serials, short features of interminable stories that attracted the masses to the theatre weekly.

"Monica also took Mehera to the movies. Once when her ayah, her seven-year-old brother, and Mehera went together to the Napier Theatre (later renamed the West End Cinema), Monica wanted to buy chocolates at the concession stand and pushed some British soldiers out of the way.
Mehera was flabbergasted. "I'm not going to push a soldier," she thought. "Monica can get away with it; she's a Westerner."
Most of the movies screened in Poona were American. A serial titled The Broken Coin (1915), starring Grace Cunard and Francis Ford, was a favourite. Every week there was a new episode, but eventually they became tired of it as the story went on forever with no conclusion."
- 'Mehera-Meher, Volume I: A Divine Romance' by David Fenster; Meher Nazar Publications 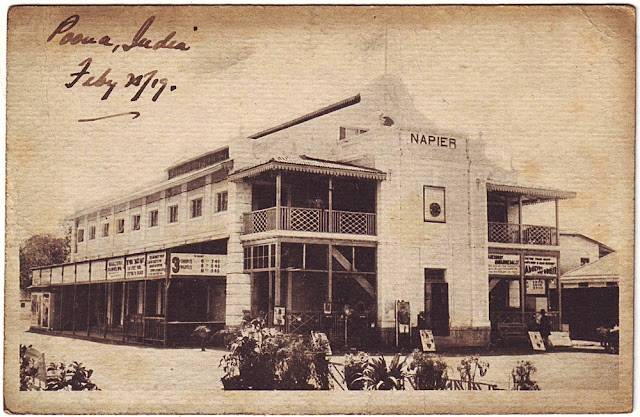 Located on a busy thoroughfare, but on an un-demarcated plot, the theatre had, in its immediate neighbourhood a lovely fountain and a bandstand, that was very popular, gathering audiences whenever 'The Napier Cinema Band', which consisted of British (or Indian) army-men stationed in the Cantonment, performed.

"In 1916, the first Poona (Anglo Indian) and the 2nd Poona (the first Indian company) gave a concert at Napier Cinema in aid of the War Fund, raising 100 Rupees. The Rosebuds (in nighties) sang 'Goodnight Mr. Moon' and were encored, before Miss Sawyer (Captain of the 2nd Poona) posed as Britannia in the concluding patriotic pageant.
-'Children, Childhood and Youth in the British World', edited by Shirleen Robinson and Simon Sleight, Palgrave Macmillan, 2013, pg. 172 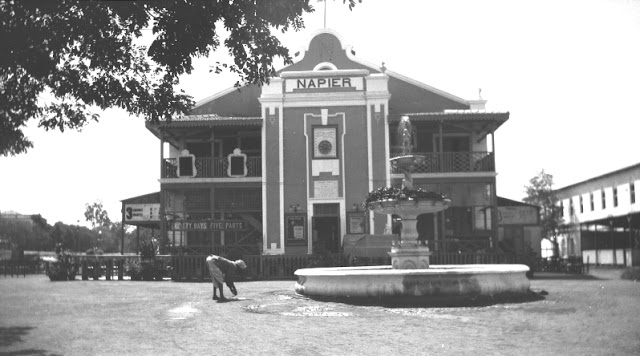 The Napier Cinema became Napier 'talkies' in 1931. Not long after that came the big theatres in Bombay, under the patronage of the great American Studios like the Universal, Metro-Goldwyn-Mayer and Warner Bros. Many old cinema houses were refurbished in this, the Indian Golden Age of Hollywood, and the Napier seems to have undergone a change too. Perhaps under the influence of the Western India Theatre Association and 20th Century Fox (I am speculating), the Napier was blessed with a two storey RCC front and a new name- the West End. 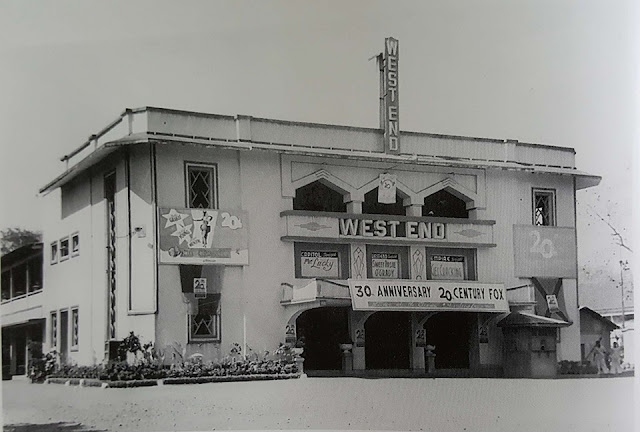 The new building was superimposed on the old gable. You can see the poor gable sticking out of the top of the new building in the photo below. The new West End highlighted its own name twice on the facade, once in large concrete letters inset as the second floor balcony balustrade and the other as a vertical mast along its axis of symmetry, sticking out upwards, and skywards from the building in an Art Deco manner. While not an Art Deco building as such, the new front, with a cantilevered porch, fake arches, and vertical ornament striping its sides fell well within the fashion of the time. The West End shows some proto-Deco flattened ornament, sloping chajjas and a Palladian symmetry. Notice the protruding porch supported on concrete brackets.

This West End was the cinema house of my childhood. Now that I look back, many elements of the old Napier still remained even then, especially the old timber staircase that I remember vividly, painted olive. 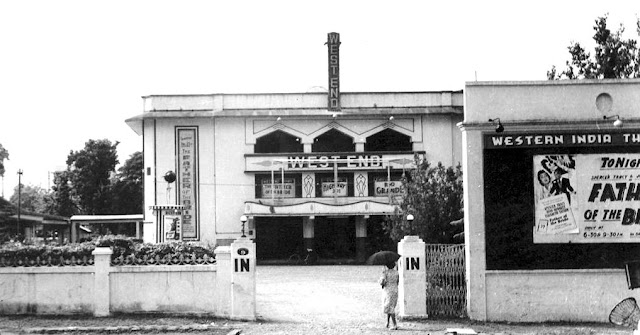 2.
The West End Cinema was within spitting distance of the Empire Cinema and the Marz-o-Rin Fast Food Place, famous for its eggy, mayonnaise chicken rolls and sandwiches and guava juice in milk bottles.

The West End marks one site of my misbegotten youth. This was my second school, where I saw all sorts of movies my parents did not approve of. Between the late sixties and the very early eighties, this is where I was indoctrinated in a variety of World Cinema, and force-fed such dire gems as Sssssssnake (Don't say it, hiss it!) (US), 3 Fantastic Supermen (Italy), Fantomas Stikes Back (France) and The Swiss Conspiracy ("My father always told me- son, never lose your head, or your arse goes with it")(Germany/US). I can safely bet that none of you have ever heard of any of these atrocities, much less seen them. 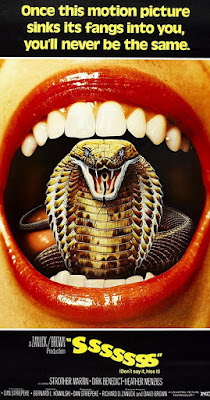 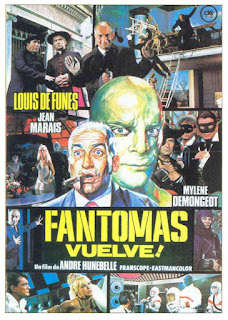 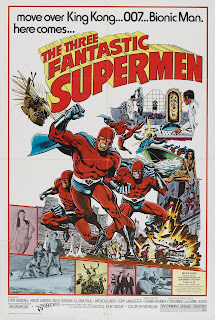 I specifically remember being taken to watch Lost in the Desert (South Africa) as a special school outing during my 2nd or 3rd standard. A horribly traumatic choice for us young-uns (and a reflection on our teachers) considering the terrible, terrible things that happen to the child in the film, including being spat in the eye by a venomous snake, after surviving a plane crash. 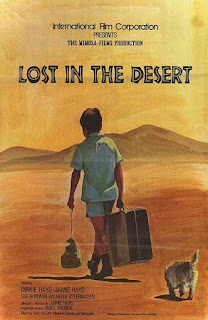 The theatre was bounded into a rather large compound, as you can see, that had a low brick boundary that bounders and lowlifes (such as myself) would sun themselves on. On one corner was a marquee that displayed two large posters- one for the feature and another for the matinee. You can see how much these posters would have impacted my innocent self. 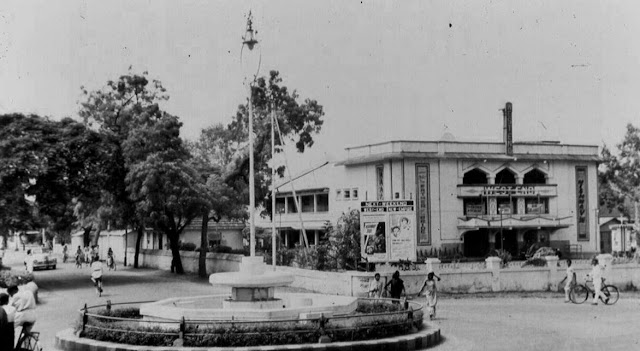 And observe the building extending in the rear. That was the site of a genuine 'merican soda-fountain, that we would aim directly for, if we had any money leftover after buying the tickets. A proper Saturday Night Fever experience, a movie I saw here too. My combed back hair dates from this vintage. The West End made me much of who I am today, I am sorry to report.

Later, the fountain became a traffic roundabout and the bandstand vanished.
Later still, in the 1980s, the West End itself was demolished to exploit the real estate value of its compound.

All that remains today is the traffic roundabout.
So it goes.