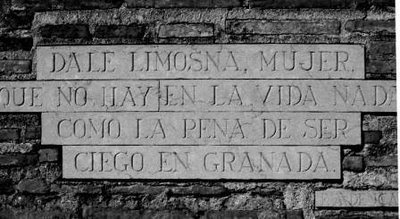 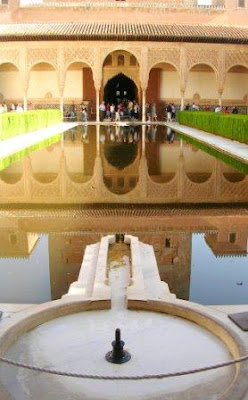 The Court of Myrtles
. 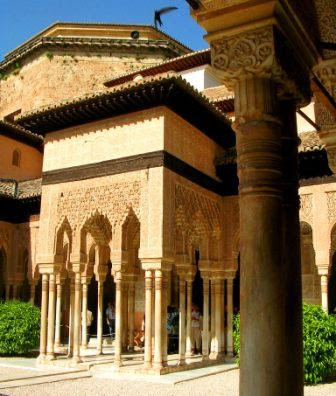 The Court of Lions
. 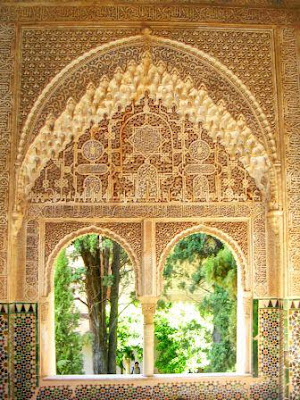 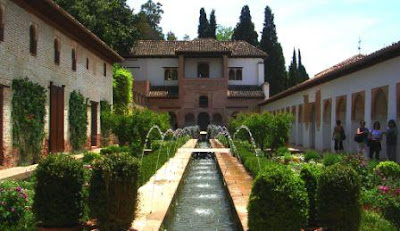 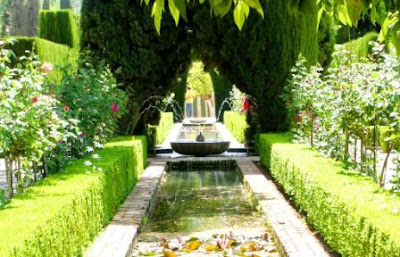 Gardens of the Generalife

Granada is unprotected from people;
since nothing or no one can defend from praisings.
Federico García Lorca
.
Posted by as any fule kno at 10:17 AM No comments:

Michael Jackson’s explosion on our consciousness paralleled my years in college. ‘Thriller’ coincides with my second year in Architecture. Television was still the venerable and much lamented Bombay Doordarshan, and one evening they did a segment on the Grammy hopefuls. These were a long string of music videos- a relatively new phenomenon to us at the time. ‘Beat It’ and ‘Billie Jean’ were accompanied by David Bowie’s ‘Let’s Dance’, Billy Joel’s ‘Uptown Girl’, Lionel Richie’s ‘All Night Long’, Culture Club’s ‘Karma Chameleon’, even Sheena Easton’s ‘Telephone’. How do I remember all this? Because I had taped the show on an old fashioned mono cassette recorder using an external mike propped up next to the single speaker on the neighbor’s television set. I must have had this tape and heard and reheard it all through college, that’s why this stays with me. Madonna, Bruce Springsteen and Live Aid all came in later years, but that year (1983) was seminal. Incidentally they never showed the Grammys, to the best of my recollection, and the memories of watching Jackson cradling his eight Gramophone replicas were from newspapers, I guess.

You knew Michael Jackson was someone else. Apart from being blown away by his dancing, it was his voice and the musical arrangements of Quincy Jones that would remain, and do even today. Just a couple of months ago ‘Thriller’ was reissued as a 25th Anniversary edition, bringing into sharp focus how we had grown, more than anything else. But the music is still fresh and continues to be part of my collection of MP3’s on my computer. Of course, after that that everyone was trying out the shaky-breaky dance movements with variable success. Mithun Chakrarvorty and Salma Agha rehashing the zombies of ‘Thriller’ in some long forgotten film still give me the heebie-jeebies just to think about it.

No one, however, could emulate the voice. In the midst of our continuing education into the Ages of Rock (Django Reinhardt onwards, by way of Muddy Waters, John Lee Hooker, Chuck Berry, Elvis, the Beatles, the Stones, Dylan, Floyd, Dire Straits and beyond) Michael Jackson was our concession to POP, and he did Rock our Joint.

I remember going to the American Center Library to watch a special screening of ‘Thriller’ and ‘The Making of Thriller’ by John Landis. Why American Center? God alone knows, but even they probably acknowledged that the cultural scene was no longer the same without Jackson. The ‘Making of’ was the first for a music video, and the first behind the scenes look at filmmaking that I can remember. This was fun to watch. Jackson played his overgrown child persona and Landis indulged him (Middle to Close up shot, Landis to camera: “This is Michael Jackson. This is Michael Jackson’s toe.’ Followed by lots of tickling and giggling). Landis, of course, had just made ‘An American Werewolf in London’. ‘Thriller’ was just a reprise of that, but the prosthetic special effects were quite novel for the time (Long strand of hair growing out of face, canines sliding out of jaws like stilettos,et al). Life Magazine (defunct and lamented too) had done a many page photo feature on the great efforts it took to apply all this on the actor, and the film showed similar atrocities being heaped upon Jackson, before he could give his shots. 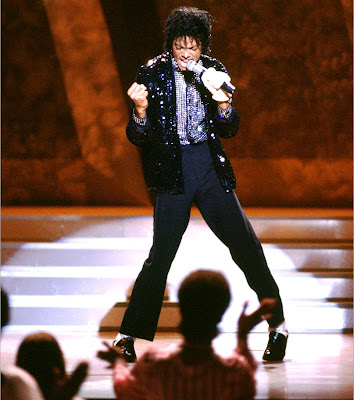 But the ‘Making of’ was remarkable for another memorable performance. It showed in its entirety Jackson performing ‘Billie Jean’ live at the Motown celebrations- sequined glove, white socked, with a fedora, Jackson unveiled the Moonwalk and forever embedded himself in the cultural space of popular music. I must check if the ‘Making of’ is on You Tube, it must be. The silken backward shuffle, defying gravity still gives a thrill, watching it after all these years. Plus, there is this quiet satisfaction in the knowledge that despite one’s forty five years and weighing twice that, one can still do a perfectly passable Moonwalk.

It seemed that Cordoba would be a crushing disappointment.

We figure out a complicated way of visiting it- needing to travel there from Seville by train, train back to Seville and then board yet another for Granada- all on the same day. Having made bookings using the fairly limited windows of opportunity on offer, we land in Cordoba promptly at around ten in the morning- only to be told that the Mezquita is shut.

The Grand Mosque of Cordoba is now the fully functioning Cordoba Catedral. In an act of the most creative vandalism (after the conquest of al Andalus by Catholic hordes) the middle third of the venerable structure had been gutted and replaced with a grand cathedral that rises out of its innards like an alien chewing its way out of a human, as in the first film. From the inside, Catholic spaces rise cheek by jowl with horse-shoe arches of the Mezquita- not that we know it at the time. The minders at the gate point to some recently xeroxed notices announcing closure due to the investiture of priests that morning. Public access to be resumed only by three in the afternoon. Our train back to Seville is at three thirty, bugger it!

In a moment of inspired lunacy (Spain does tend to make one uno poco loco, in any case) we decide to hang around until three, give the mosque’s insides a once over in about five minutes flat and then run like hell for the nearest taxi to take us to the estacion- for we would see the mirhab, or bust! Ridiculous, but that leaves us with five hours to twiddle out fingers, and toes.

In mindless concentrics, we walk around the streets lining the outer walls of the mosque- and as the streets get narrower until even two persons would brush shoulders passing each other, and the crowds keep increasing making the shoulder brushing mandatory, we come across the first of the unexpected pleasures that alleviate our dampened souls. Before we know it, we are immersed in the United Colours of Geraniums. May is the season of Cordoba’s Patio Festival.

Every year at this time the old houses that line the alleyways around the mosque bloom with flowers. A competitive sport this, every space- entrance way, courtyard, balconies and window box vie for the prize of Best Patio. The crowds that we vie with for space have all turned out to gaze at these amazing displays, and scurry around from courtyard to courtyard filling up memory sticks of mobile phones and digicams with impunity and making a godawful racket while they are at it. Marvelous! 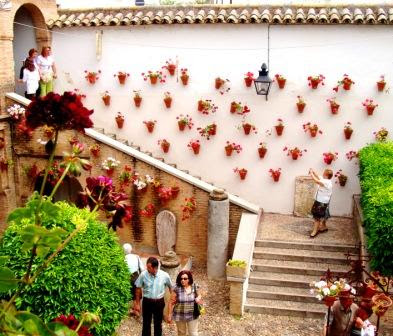 The spaces where the flowers are arrayed are little cortiles in these havelis (favelas?). Alfresco, with a small fountain on cobbles or paving and a stairway to the upper floor. Some of these spaces are not even bigger than a living room in a Bombay flat, but that is space enough to fill. Every available wall has flower pots with geraniums in full bloom (la flor de los patios), traversing every tint, tone, shade and hue from white to blood red, standing out in stark afterimage from bright green leaves and stems. The Nasirids are probably to be complemented, for these flowers originate from Africa. All these concentrations of color stand starkly against whitewashed walls bathed in the midmorning Mediterranean sunshine. Orange trees, rose bushes, clambering vines, azules ceramic plates and occasional bric a brac add to the clutter. 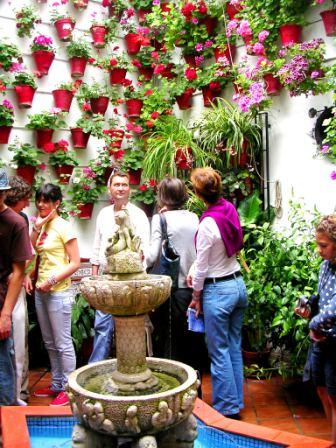 The Mediterranean in spring.

That nature is at its most fecund is obvious at this time in southern Europe. In the Andalus, one cannot miss trees laden with oranges- Naranja, especially in Seville, Cordoba and Granada. The twin legacies of the Nasirids, irrigation and plantation, are now the hallmarks of the region. Oranges, pomegranates and roses (roses, everywhere), probably descendants of those planted by the erstwhiles engulf you- chance encounters with color are a constant source of amazement. And yet, in Cordoba, our dip into color is unexpected, and overwhelming. 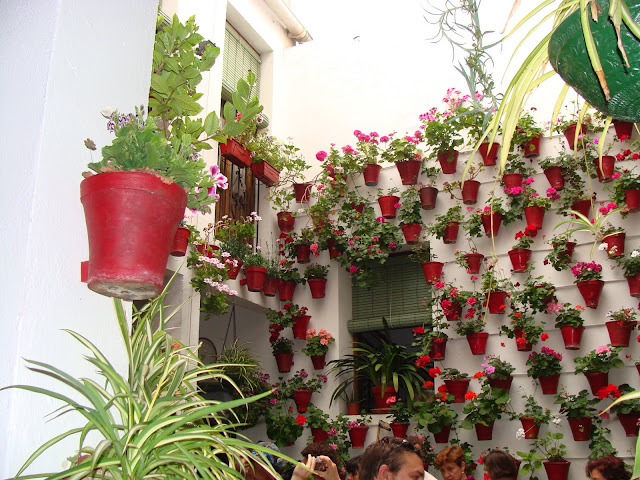 Some of the streets where the Patio Festival is held are within the Jewish barrio and we have a quick stop-over at a small but very elegant synagogue, built into the warren of houses. This reminds us of our own little Bene Israeli synagogue back home in Panvel, but this one is ornamented on the interior with Islamic geometric patterns and Hebrew Scriptures in stucco. Nearly seventy patios are opened for viewing during this time, not that we see them all, and we move and pick and choose like magpies attracted by every bright color that catches our attention until we do not quite know where we are. And then, satiated, we make our way back to the mosque to stand (sans expectations) at the head of the line. 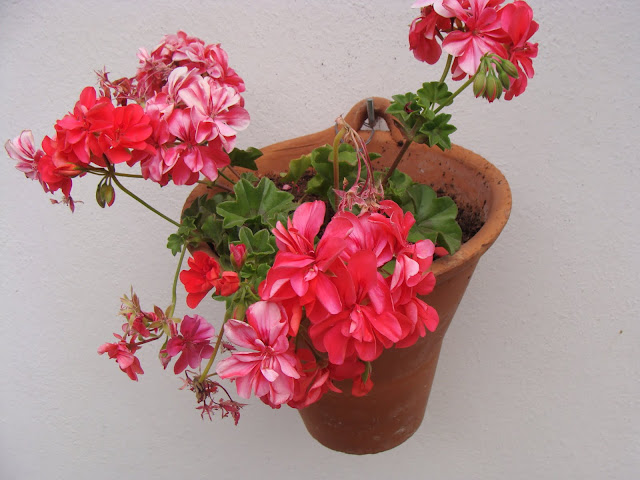 Pretty soon an anaconda of touristas forms behind us, and the powers that are, probably thinking us a really desperate lot, open their counters at two thirty. We race through the (initially) empty mosque and fill ourselves with the sights of the forested arches and foliated domes, admire the stunningly ornamented mirhab, fuss over the absurd juxtaposition of the cathedral in a Muslim praying space, wonder about reused Roman columns, are thrilled by the recently excavated Roman mosaic floor on display- all with an extra half hour at our disposal, satisfy ourselves (to the extent possible) and run out.

We did catch our train, after all. 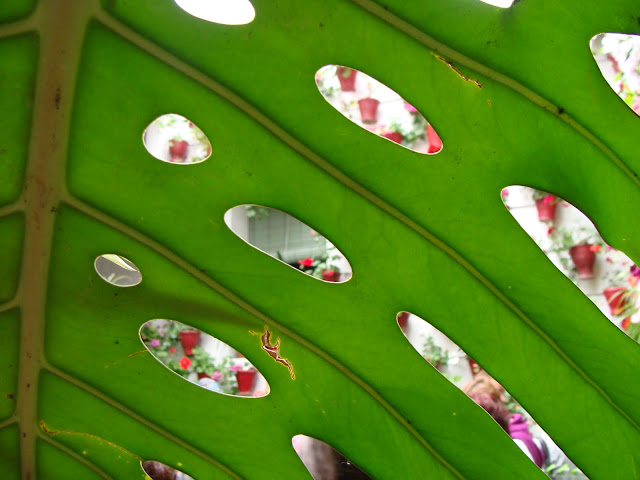