After Words 1: Raise the Roof


An edited version of this piece is the first in a column called 'After Words' in Time Out Mumbai.
This is published in the June 8-21 2012 (Vol 8 Issue 21) issue of Time Out Mumbai.

There is a reason God invented flat roofs- so that his creations could loiter, contemplate the cosmos or ‘in this life full of care’ find some time to stand and stare. Terraces, ubiquitous to modern Mumbai, are for most part used to stash old furniture, residual air-conditioning equipment or to install mobile phone towers. The breath of fresh air that a rooftop offers is never breathed, and this part of the building is often relegated to: if I can’t see it, it doesn’t exist. It’s bad enough that these very vital spaces are ignored in residential buildings, but in public buildings these are resolutely ‘No Man’s Land’.

In Mumbai then, it is refreshing to see elevated planes brought back into the reckoning in the public realm, as was done recently. The roofs of two of our best known buildings were opened up for public access and use. Of course, conditions applied, but the opportunity to climb up to take in a high level view of a busy street or a bird’s eye of the south Mumbai skyline is an occasion for delight in itself.

The Jehangir Art Gallery recently opened a small display space, thanks to the munificence of Kakubhai Kothari, the veteran photographer. This is significant not only because the new gallery is dedicated to photography but because it is accessed from the terrace of the building; you have to first go outdoors to go indoors. While the exhibitions are reason enough to climb the newly refurbished steel stairs, the chance to hover above the Kala Ghoda and take in at leisure the life passing below is rare joy. Looking out over the western parapet, you can enjoy the neo-Gothic details of the Elphinstone College, Army and Navy building and the David Sassoon Library at close quarters, while turning eastwards you can debate whether the Stock Exchange building, soaring high above Rhythm House, should ever have been built. Or you can, in a position slightly removed, emulate a Pi-dog, and in Arun Kolhatkar’s words, muse: "...this is the hour/ when I can call this city my own/ when I like nothing better/ than to lie down here, at the exact centre/of this traffic island..."; hoping of course that the management does not chance upon you in your state of horizontality.

The other roof that was host to a public event recently was the top of the Godrej Bhavan, that modernist glass and aluminium pile from the 1970s, on Home Street, overlooking the Bombay Gym. The Godrej-organised Friday event had Sidharth Bhatia and Sathya Saran reading from their biographies of Dev Anand and Abrar Alvi. While the authors kept the audience enraptured, it was the balmy evening spent alfresco on the manicured lawn of the roof with its signature trees, and the ‘khoya khoya chand, khula aasmaan’ over the Azad maidan made this event magical, and quite filmy. The opening up of this otherwise private corporate space to the public, even for a few hours, is a gesture that deserves kudos, but also calls for several encores.

A recent survey has found that all the maidans, parks and other recreation spaces put together in Mumbai amount to an imposing total of one square meter per person. That’s space enough to put your left leg out to do the boogie-woogie, but not enough to do the phugdi. Looking beyond ground coverage, however, you know that since the late fifties almost all the buildings in this city have flat roofs that are available for active use. Le Corbusier, the modernist architect, in the late 20s, called for the flat terrace (made possible by RCC construction) to be imagined as a roof garden for multiple uses, to replace the patch of the same size removed from the ground by the building’s footprint. What is required is a culture of inhabiting the open-to-sky. Seen this way, the city could reclaim an amount of open space equivalent to its own size for public use. Mumbai already has a culture of the pedestrian; all that is needed now is to develop the daily habit of climbing up instead of down.

Email ThisBlogThis!Share to TwitterShare to FacebookShare to Pinterest
Labels: After Words, Column, Mumbai, Time Out Mumbai


This is a piece I wrote in June 2003. I am posting this here in the nature of archive particularly after brainstorming with Chirodeep Choudhary today about his project on the views from/out of high rises. I wonder how many of you saw 'Bhoot' and if you did, how many remember it at all. 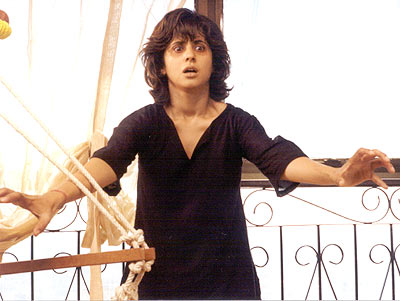 Just saw ‘Bhoot’ this evening, and this set me off wondering how architecture is depicted in films. There are many film theories, but let that go for another time. I enjoyed this film, and here are some ruminations about its effective use of space.

The first half is the more effective. An ordinary high-rise residential apartment building (definitely not Hafeez, could be Khareghat) is one of the main ‘actors’ in the film, It is shot though various distorting lenses to give it a Bhootly appearence, but what makes it menacing is its utter ordinariness. What hits you is the view from the terrace: the horizon is filled with buildings- each ordinary and mediocre, you cannot differentiate one from the other. The skyline is jagged, and there are no landmarks to give it focus. Is this the view that most of the upper classes in Bombay look at out of their windows?

The ordinariness is reflected in the couple (Ajay Devgan and Urmila Matondkar) who move into a duplex flat with a terrace on one of the building’s upper floors. The fact that they have to rent the apartment is itself an act of disassociation. They have come from somewhere, we don’t know. They live in the anonymity of an apartment that belongs to someone else in this building that, apart from 1 landlord, 1 Bai and 1 watchman, no one else seems to inhabit.

This vulnerability is seen in the well crafted initial scenes. All they have is each other and the flat. When Ajay goes to work Urmila has the house to herself, with its double height spaces and the ambient sound of the many channels on cable TV. It is a big house for one person to inhabit alone for the day. A prime target for attack: whether voyeuristic, in the form of the watchman, or supernatural in the form of the Bhoot.

The spaces in the flat are interesting. The double heights allow for a bottom up and top down shots which reminded me of Escher once in a fleeting shot with Victor Banerjee and Ajay Devgan. The duplex’s stairs to the upper level figure prominently. There is an unstated menace in the steps, that are unprotected (no railing). Other aspects of the flat show a fuzzy line between safety and danger: the windows have no grilles, the terrace no protection above the standard parapet. The main door seems to open for everybody. But there seems to be no one in the building. The basement parking lot has cars but no people. There is unfinished RCC here and there with the reinforcement bars poking out like knives ready to put out some one’s eyes. The street outside has no character at all. All told, this is a chillingly unfriendly habitat, which nevertheless is home. A particularly dangerous place for children, or the mentally imbalanced.

Seeing the film, I realised that the effect of the depiction of architectural space in Ram Gopal Varma’s ‘Bhoot’ is not in what he shows, but what you see. The uneasiness you feel is by reflection. Your everyday fears are ignited by the shots of detail and the relentless roving camerawork: The fear of being alone, the deja-vu feeling that someone else is in your home besides you, the fear of falling off an unprotected terrace or window, the fear of intruders, of attack from outside (the vulnerable main door), the fear of hurt (the jagged corners of the duplex’s stairs), even the fear of being in a public place full of strangers, and suddenly finding yourself naked. All these fears are experienced by a viewer while seeing the film.

Another quality that brings about the effectiveness of the interior spaces is that this film is shot on location: this is a real apartment, this is a real building, there are no sets, even the basement parking lot is authentic enough, except for perhaps the jagged reinforcement (for what is an unfinished column doing in a basement?) The apartment is not very well finished and it is these nicks and burrs that in fact drag us into the story by implying that this could be any one of our own homes. Nothing is perfect; this is no idealized ‘Hum Aapke Hain Koun’ world. That’s what makes this place spooky. Also the ‘interior decorashun’ seems hurriedly thrown together, with a mix of fresh furniture (a rather usefully designed bed, and some horrendous and large paintings) and pieces left over (a mirror, what else?) from the earlier owners. This is a house that has not yet become a home, not for the couple.

A home is something one needs to root ones self in. A protected space to return to, to take for granted. If the home itself is perceived to be oppressive or menacing, there is no where you can go. This is a clear subtext in the film, as the couple hardly ever leave the apartment throughout. By extension, if one of the partners becomes the object of fear and suspicion, how can you resolve conflicts?

The apartment and the building, as I mentioned earlier, become characters in the film, ‘acting’ along with the rest of the cast. That’s what makes the film enjoyable. Ambient space design that suggests the authenticity of life can go a long way to make a film realistic. The film that comes to mind here is ‘Alien’, the first one that showed the inside of spacecraft as ‘dirty’. Most of the space films that came before, such as 2001 and the Star Wars series showed a clean, well lighted interior, more a virtual mindspace rather than the real world. They always made you aware that this was a set. I can’t remember the last time spaces were so integral to a Bollywood film. The only example I remember with great fondness is the inside of the Qutub Minar shown beautifully with spiralling camerawork around Dev Anand and Nutan in the song ‘Dil ka Bhanwar kare Pukar’ from Tere Ghar Ke Saamne.”