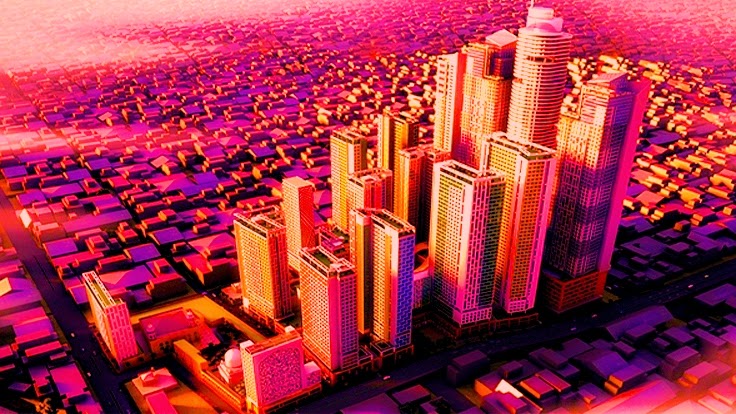 Now that the votes (and the die) for the next government are cast, it does seem that Bombay’s fortunes are nowhere in anyone’s political priorities. In the run up to Election Day, though, there seemed to be one area of emerging consensus. All the candidates (who matter) from the South Mumbai constituency agreed that 'Cluster Development' in the city is the way forward. The only answer.

The biggest problem with our old city, according to them, is its rapidly deteriorating stock of buildings collectively called 'cessed'. These century old piles are filled to the brim with nonchalant tenants paying ‘controlled’ rents and hapless landlords with too few resources for maintenance. As a result these buildings are now decrepit, have common toilets, and are in imminent danger of collapse every monsoon. They are also densely packed together and there is no greenery anywhere.

The panacea for this sorry state is, of course, Cluster Development (aka DC rule 33/9). The argument in its favour is that developing a largish tract of land is less piecemeal, more systematic, and can be 'community driven'. A 40,000 square footprint today can contain several buildings in the inner city. Bringing them down to tabula rasa allows the redevelopment phoenix to soar, up to four times the plot area. These Elysian Fields would provide every stakeholder with a proper (300 sft) unit with toilets inside, lifts, and open spaces around buildings, with trees and lawns. Above all, the rented tag gets converted to ownership, the ultimate wish of every Mumbaikar grihasta. Could anything be better? Two projects at Bhendi Bazaar and Lower Parel are already under construction, so there is precedent too.

Let me be contrarian here. Leave aside the near cliché that such developments only benefit builders and speculators. In making my case against cluster development, I appeal to your urban and civic sensibilities.

Buildings in ‘clusters’ are equally piecemeal, only now the piece is larger. Here, entire neighbourhoods in the dense inner city will potentially be opened out to new vistas of rising skylines, infiltrated by built forms and open spaces that did not previously exist. This is the urban equivalent of pulling out teeth and replacing them with nails instead of dentures.

Our neighbourhoods- Chira and Bhendi Bazaar, Parel and Kalbadevi, Lalbaug and Dongri, all have a scale and uniformity that make up the urban whole. Congestion is the essential urbanity and civic make-up of the inner city. Shop lines open on footpaths, buildings touch buildings familiarly, balconies overlook streets and roofs match up in straight lines, making comprehensible perspectives. And there are people everywhere. Corners are special and built differently, giving identity and helping way-finding.

None of this is sustained in setting back buildings from the street, bounding them in the nutshell of compound walls, CCTV and uniformed security surveillance. Essentially, this large bite is no longer the city that was, only a regurgitated, unfamiliar, aspiration-fulfilling bolus.

Almost all of Bombay's residential neighbourhoods once spoke a ground plus three floors lingo. The city grew through iteration and accretion, just like Bambaiya-speak. Over the years street culture evolved to raising one floor. This happened everywhere, you may live in one such building. Now, imagine a building across your street looming forty floors above you, cutting off sunlight, subjecting you to a wall of heat radiating from air-conditioning units opposite. Such is the price of caprice the older residents of Mutton Street will face in year or two.

Should buildings in bad shape not be repaired? Well, of course they should, but by respecting building lines first. A contemporary, well appointed, state of the art redesign that retains the previous footprint and matches the height and floor-lines of its neighbours on either side is completely possible. Courtesy demands that buildings be re-imagined in their original context, one by one. With broad agreement, every new building may rise by one floor or two, and still retain the harmony of the street. Congestion will remain, but not further densification. Most of Mumbai’s housing requirement can be fulfilled if each residential building is raised one floor. You do the math.

My one disagreement with the cluster model should concern whoever wins the South Mumbai Lok Sabha seat. 33/9 will result in instant gentrification. Either overtly, or through subtle nudge-nudge wink-wink, the older residents will realise they no longer have a place in this new dispensation. Neighbours will be replaced by strangers, humsayas will be lost, local small shops will become untenable, business networks and societal ties, the result of decades of co-existence will dissolve. Ultimately diversity will decrease substantially making the new neighbourhood a confine of homogeneity served in no full measure by 'outsiders'.

This is counter-intuitive, but I do believe that the much derided Rent Control Act helped preserve a social equity amongst the residents of Bombay across half a century. A fixed low rent allowed the very poor to live in the same building with the very rich, and certainly occupy the public realm, the streets outside as equals. With tenancy morphing into ownership this will no longer be the same- as the city you once called Bambai Nagariya gets slowly transformed, the aam aadmi voter in your constituency could well be endangered by the next elections.

The following piece was (in a slightly edited form) commissioned by Time Out Mumbai for their special issue on Bhendi Bazaar, Vol. 9, Issue 12, February 2013. 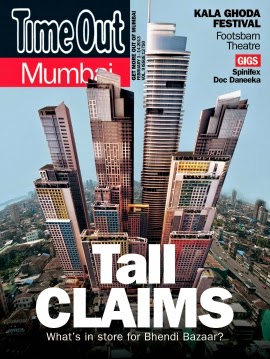 Splendid Isolation
What Cluster Redevelopment will mean for the city

“Mohalla maa jayaaoon choo!”
Ever since I remember, this is commonly heard in many households. I am going to the Mohalla. The Mohalla is the Bhendi Bazaar. This throbbing heart of Bohra culture in Mumbai is the place to congregate, socialize, conduct small business, pass time, and gorge on pyalis of street side ‘chana-bateta’- a savory of chickpeas and potatoes that could also be ‘packed-up’ for the kids. The Mohalla is for ziyarat, for offering prayers at the Raudat Tahera, the mausoleum where the present Syedena’s father is laid to rest. And of course, if it is Jumma, it must be Chor Bazaar, the Friday-only market on the adjacent Mutton Street, where one can be equal parts flaneur and haggleur.

Urban culture in Mumbai is very real. It is also intangible, and thrives on two assumptions- first, that an urban place in the city can be taken for granted; and second, to paraphrase Robert Frost, when you have to go there, they have to take you in. It is anchored around a very few (and, on occasion, nondescript) physical markers: a left turn here, a shop sign there, a street vendor at the corner. Urban culture is thus, also very fragile. This is true for Bhendi Bazaar, and also for Chira Bazaar, Saat Rasta, Sewri, Parel, or any of the nine or so locations in the city where Cluster Redevelopment is scheduled to happen.

In a city that has replaced planning with speculation and public administration with outsourced anonymity, it is little wonder that the future heart of Mumbai can only be envisioned as a glorious Hausmann-like phoenix, rising out of a tabula rasa. Cluster Redevelopment, based on Clause 33.9 of the Development Control Rules, is the way the state government sees urban renewal in locations populated largely by cessed buildings or historically rented properties. Accepting the premise that the state itself cannot redevelop, the rule allows for private developers to rehabilitate existing users in the same location with some more areas and amenities and offers the developer a substantial pound of flesh for profiteering. While basic humanitarian gestures of temporary re-housing for those existing is built-in, the grand vision is the builder’s entirely, and very naturally based on the attractiveness of the project to potential buyers at full market price.

This vision disregards the intangible, but very real patterns of urban life. Mumbai is Mumbai because the rich and the poor have always lived as humsaya, with homes facing the same street; because the diversity of economic class and religious affiliation has meant nothing, especially in the densest neighbourhoods; because although there are ghettos, especially in the inner city, there are no walled exclusions; because the desire to come together to create an urban place is the result of social accretion over years, very real, even if you can’t put a finger on it. Mumbai is Mumbai not only because of urban homogeneity, but because of social diversity. To presume this the other way round, like cluster redevelopment projects seem to do, is to deny and choke the very spirit of the city.

Look at the New Bhendi Bazaar, this is what we see: a private future built on sixteen acres of south Bombay, imagined by the wealthiest of a Mumbai sub-community in its own image. We see pristine, ‘homes of rest and quiet’, secluded from the rest of the dirty city, your city, by walls or buildings that function as walls. Access into these redesigned acres will now be through gateways that never existed before. We see skyscrapers rising sixty stories abutting the same narrow street on which older four storey structures still exist. We see several buildings demolished to make way for a large park with unobstructed frontage around the Raudat Tahera.

Where did the Mohalla go? Can the same social fabric that held together for a century remain in this upmarket utopia? Can small businesses thrive without their former durable networks? Will Chor Bazaar retain any identity, when one edge of Mutton Street transforms into a barricade?

Cluster redevelopments as private real-estate speculations only take away from the city, both physically and spiritually disentangled from the larger reality of metropolitan Mumbai. While they load fresh urban burdens onto its infrastructure, they deign to exist in splendid isolation, in a rarefied haven of Eloi, while Morlocks outside toil in its grime.

Who speaks for Mumbai in these new projects? We accept the rights of the individual as supreme in our capitalist present. No one denies that better housing, amenities and facilities should be paramount for all. But should we, at the same time, not define responsibilities the same individual has towards the city at large? No quid pro quo?