Miros of the Spray Can

16 May 2009
Spain seems to have given its vertical public spaces (of about twice human height) completely to practitioners of graffiti. There does not seem to be a single space left unmarked and unsigned. Any road, even slightly off the tourist track will have these profuse expressions of hombres at large. Although we did see some graffiti on vertical surfaces of such height that would have required rappelling skills!

Many are artistic in the fashion of the Miros of the spray can, although most are (probably) gang related territorial markers. The most vibrant and colorful graffiti that we saw was on one bank of the Guadalaquir leading up to the Alamillo Bridge in Seville. Techniques also vary- a new form used stencils- leading to some fine work, and also work that could be replicated quickly, challenging the one off aura of larger, elaborately sprayed neighbors. A lovely one was in English that said 'Lost your (image of a) button'. 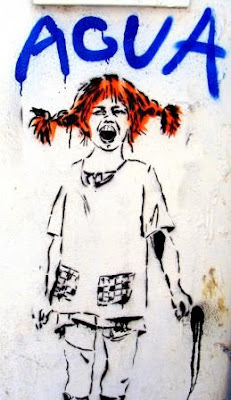 What makes graffiti a truly citizens art in Spain is the possibility of protest. Since every wall is fair game, exhortations/protestations indicate the contemporary climate. There are CCTVs everywhere and official indications to that effect. That has not stopped, probably encouraged a large graffito: 'Videosurveillance NON!' Others we saw said 'Securidad Muerte!' 'Free Catalonia' and my personal favorite- 'Errata, Ergo Sum'. 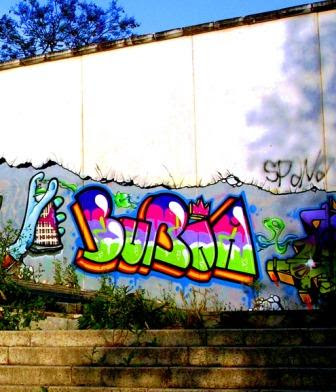 There is a refreshing nonchalance in the additions to the older buildings in Madrid. The obvious public example is the addition of the elevators in the Reina Sophia Museum. A pair of slick hi-tech glass and stainless steel towers are appended to the outside of the older palacio for easy access to upper floor galleries. Visiting the Guernica deserves such a rite of passage, I suppose. These glass boxes overlook the beautiful plaza that fronts the museum, justifying the use of the scenic elevators. The words Reina and Sophia are etched large on the towers evoking memories of the fad for super-graphics in the early PoMo day of the eighties. 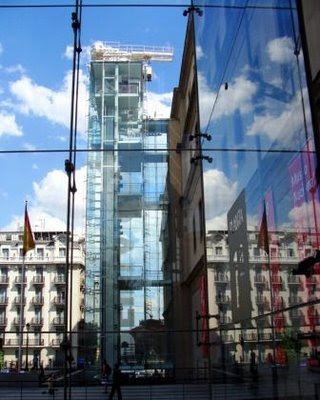 The point is that contemporary inserts into historical spaces are not always a bad thing. Contrast this with Raphael Moneo's addition to the Atocha Station- another building evoking the eighties and some of the horrors that Botta and Bofill were up to at the time. The interior spaces are interesting specially the train platforms themselves, which are a delight. But I am not sure how the drum-like central circulation space and the cuboid clock tower sit with the fabulousl19th century glass and iron station.

On the subject of retrofit, the last word surely goes to the lift installed in our tiny B&B- the Hostal Luz on the Arenal. Fitted in (the perhaps two feet three inches wide) stairwell of an older four floor building, the elevator is exquisite in its modernity- with all the fittings- the stainless steel and glass that made the Reina Sophia's what it is. Wide enough to accommodate me, but not me with a rucksack, making me feel like a mujera in a tube top, traveling in it made up in style, elegance and convenience whatever it lacked in volume.

8 May 2009
I am writing this on a high speed train from Madrid to Sevilla (AVS), watching the rolling flatness of central Spain speed by.

In one evening, we were able to see Picasso's Guernica, Dali's The Great Masturbator, Lumiere's Employees Leaving a Factory (1896), Velazquez' Self Portrait with the Meninas of Felix II, Durer's Portrait of the unknown man and Hieronymus Bosch's Garden of Earthly Delights and the Haywain. That must amount to something.

I finally concede that there is a difference to looking at a great work of art in a book or even a high def image to standing in front of the real thing. Contemplating the Guernica- there is so much in the painting that just doesn't register in a reproduction, especially gray on gray. The delicate and harsh brush strokes of Dali need to be looked at with your nose at a distance of six inches from the naughty bits. So up yours- Baudrillard and Walter Benjamin!

The Museum of Reina Sophia has a series of photographs of Picasso's painting in various stages of completion, and the many morphs it went through, fascinating. As are the several paintings called Postscripts to Guernica. Picasso's Hombre with Goat is also a delight leading to a wistful wish- the Great Hombre himself should have made more sculptures. The twisting goat about to spring out of the man's grasp (who holds the beast almost in a wrestlers grip) is reminiscent of the twisting Laocoon.

Nothing quite beats taking the long(ish) walk from the Atocha past the Botanical Gardens and reaching the Prado to find that the entry was Gratuitas.

Our gracious landlady at the Hostal Luz is surely the reason the late Wren and the equally deceased Martin added 'onomatopoeia' in their chapter on Figures of Speech in their unlamented text on Grammar. She spoke no English and made up for it, quite successfully communicating in a mixture of machine gun Castillian and a wide variety of sound effects (Phut-pht-pht-pht!! bole to turn right)
Posted by as any fule kno at 6:19 AM No comments: