What happened to the Lions?

Starlings are tough
but the lions are made of stone
...I'm thinking about the lions
What happened to the lions, in the night?
"Lions" (1978), Dire Straits

After the delight of walking through the Court of Myrtles in the Alhambra at Granada, and entering the fabled Court of the Lions, we were in for a shock. For the lions, all twelve of them, had gone walkie, leaving behind a forlorn basin in a new wooden box. Why build a cage after the lions had bolted? 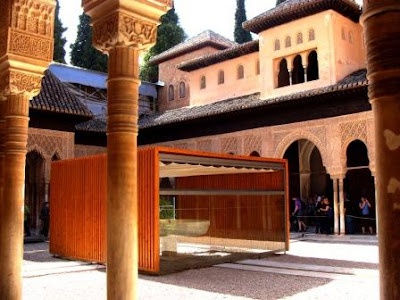 The marble lions, the centre piece of the court had been removed to a safe haven to be restored. Over the centuries, lime and grime had coated their noble visages to a point where their features were in danger of being obscured. Conservators would toil over the course of the next two years (2009-2010) to bring back the beasts to their pristine state.

No consolation to us though, we, who had paid good money to see them. However temporarily, the centre piece of the visit to this Nasirid Court, built by Muhammad V between 1362 and 1391, was obscured. The tableau of our imaginations collapsed like a card-castle, and replaced by an entity as alien as the monolith among the Neanderthals in Kubrick’s 2001. What appreciation could be possible for the surrounding court and chambers, with their exquisite ornament of geometric and calligraphic finesse, when the vellum itself was botched with spilt ink? 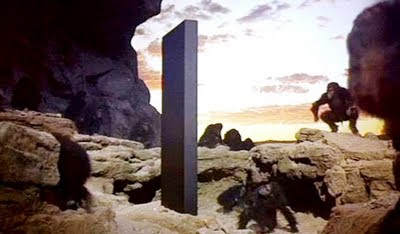 What were the conservationists thinking?

This brings me to the issue of interventions. Any infill in an existing environment will be viewed critically in inverse proportion to the time that environment has remained pristine. Any change that is not incrementally invisible will hurt both memory and ‘good taste’. Part of our mooring in life is to be able to take some things for granted, and the environment in which we physically move, that of the home, the street and the city work best when they are backgrounded to our own lives. So change, any change, would in effect be undesirable. We would be fooling ourselves, however, if we thought that we could live in the vacuum of our own imaginations forever.

So what kind of intervention is the more acceptable- the harmonious or the unpredictable? In recent times architects have been called upon to make these choices in an increasingly built environment. There are few tabula rasas, especially in our ageing cities, spaces are constantly being remodeled for a variety of reasons. Insertions are inevitable, and they will be new. What attitude of conservation, or conservatism should the architect adopt? 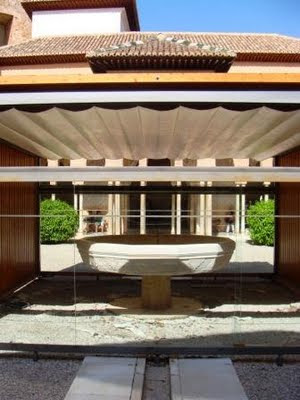 Look at the insert in the Court of Lions. The central fountain of marble was two tiered- with a large lower basin and a carved upper fount. Twelve lions flanked this basin radially facing outwards. Positioned more or less in the center of the Charbag that the crossing water channels formed, the fountain formed the focus of  both axes that led in from the entrance to the court and that led out from the surrounding chambers. Both lions and upper fount are now significant by their absence. The lower (large) basin was in need of conservation, too. The rim of the basin boasts of an eulogy for Muhammad V carved in calligraphed marble by Ibn Zamrak describing the building of the court and of the lions. You can read this poem below.

The basin is large, simply too large to remove from its central location. So it has been enclosed, not by a tarpaulin or some such, but in a ‘camera’- a room of its own. This room is made of slatted timber on a metal frame, with glazed front and back along the shorter side of the court. Visitors can view the basin as it goes through various stages of restoration from the glazed ends, while the slatted end gives a new foreground to the axis leading on to the Hall of the Two Sisters and the Hall of the Abencerrages.

Under the roof of this box is a canvas canopy that can be moved as desired. The outer box of wood can (seemingly) be slid out along its axis to allow for a larger inner volume, and the canvas roof on the metal frame can be then be a shelter against the harsh south Mediterranean sunshine. The wooden slats allow for cross ventilation and the glass has perforations too. The entire system sits lightly on the pebbled base of the court. With this intervention, the conservators and their precious object are protected from the elements- from both solar radiation and the droppings of the thousands of swallows who inhabit the Alhambra, providing a constant chirruping in the background and casting abstract patterns on plastered white walls in the various courtyards. All very functional, of course, but does the intervention work?

It does take getting used to. First, the disappointment of the missing lions needs to be overcome, and then a reconciliation with the wood, glass and canvas replacement. The ‘camera’ is a small room, proportioned not to overwhelm the arcade of the court, allowing space and light enough to appreciate the existing architecture. It forms a new element, an installation, in this space, that creates its own presence, becoming part of the stepped visual axes as it rises from fountain to arcade to roof to dome. The glazed ends form a portal framing the basin with the arches behind, and you realize that nothing is really lost. 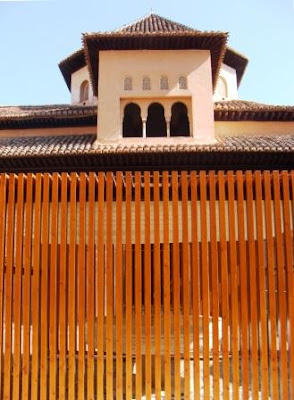 The Court of the Lions in the Alhambra now offers an alternative view, for a limited period only, as long as the conservation process lasts. During this time the arcades themselves have come into their own, not having to remain secondary to the impressively iconic lion fountain that dominated the composition of the court. The ‘camera’ can be appreciated, in of itself, as a well crafted modern device, or seen as at an interim scale between the basin and the arcade in a larger unfolding of spatiality. The absent lions constantly intrude on our imaginations. The conservators have made the right choice by not replacing them for the time being with plaster or GRF casts.

For too long in the last two hundred years has the Alhambra been exoticized and orientalized, mostly by visitors from the West (Washington Irving, Richard Ford, et al) who came to wallow in its ‘perceived’ decadence and relegated it to a ruin by treating it as such, occupying it with unseemly callousness, vandalizing it with graffiti. After centuries of suffering in such pitiless ‘timelessness’ the Alhambra, or one part of it at least, has become a dynamic space once again, with its new intervention. Artists like Christo and Anish Kapoor today, thorough their installations in well regarded public spaces make us renew our relationship with those environments by shaking our own perceptions of those spaces, and asking us to seek new meaning in those places that we took for granted. Maybe this was not what the conservators at the Alhambra really had in mind, but the enclosure around the basin forces us to look at the former Moorish palace anew, and that is something. 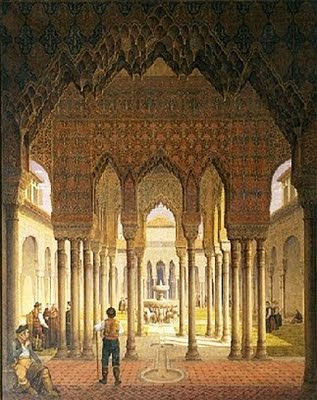 John Dobbin, Lions in the Alhambra
Water color, From a sketch made in 1859, V&A Museum, London


Poem on the basin of the Lions
Ibn Zamrak (1333-1393)
"May The One who granted the Imam Mohammed
with the beautiful ideas to decorate his mansions be blessed.
For, are there not in this garden wonders
that God has made incomparable in their beauty,
and a sculpture of pearls with a transparently light,
the borders of which are trimmed with seed pearl?
Melted silver flows through the pearls,
to which it resembles in its pure dawn beauty.
Apparently, water and marble seem to be one,
without letting us know which of them is flowing.
Don't you see how the water spills on the basin,
but its spouts hide it immediately?
It is a lover whose eyelids are brimming over
with tears, tears that it hides from fear of a betrayer.
Isn't it, in fact, like a white cloud that pours
its water channels on the lions and seems the hand of the caliph,
who, in the morning, grants the war lions with his favours?
Those who gaze at the lions in a threatening attitude,
(knows that) only respect (to the Emir) holds his anger.
Oh descendant of the Ansares, and not through an indirect line,
heritage of nobility, who despises the fatuous:
May the peace of God be with you and may your life be long
and unscathed multiplying your feasts
and tormenting your enemies! "


PS.
The fountain was two-tiered- lower large marble basin, upper carved nozzle with a smaller basin. This is evident in the water colour by John Dobbin from the 1860's. The two tiers are also visible in a silent documentary on Granada and surroundings made in the 1920's.

However all contemporary photographs before the restoration show only the lower large basin with the lions. At what point was the upper portion removed? Was it, in fact, a later addition- after Ferdinand and Isabella took over the premises in 1492? I have not been able to find any references to corroborate.

For the time being, the missing part of the fountain remains a curiosity.