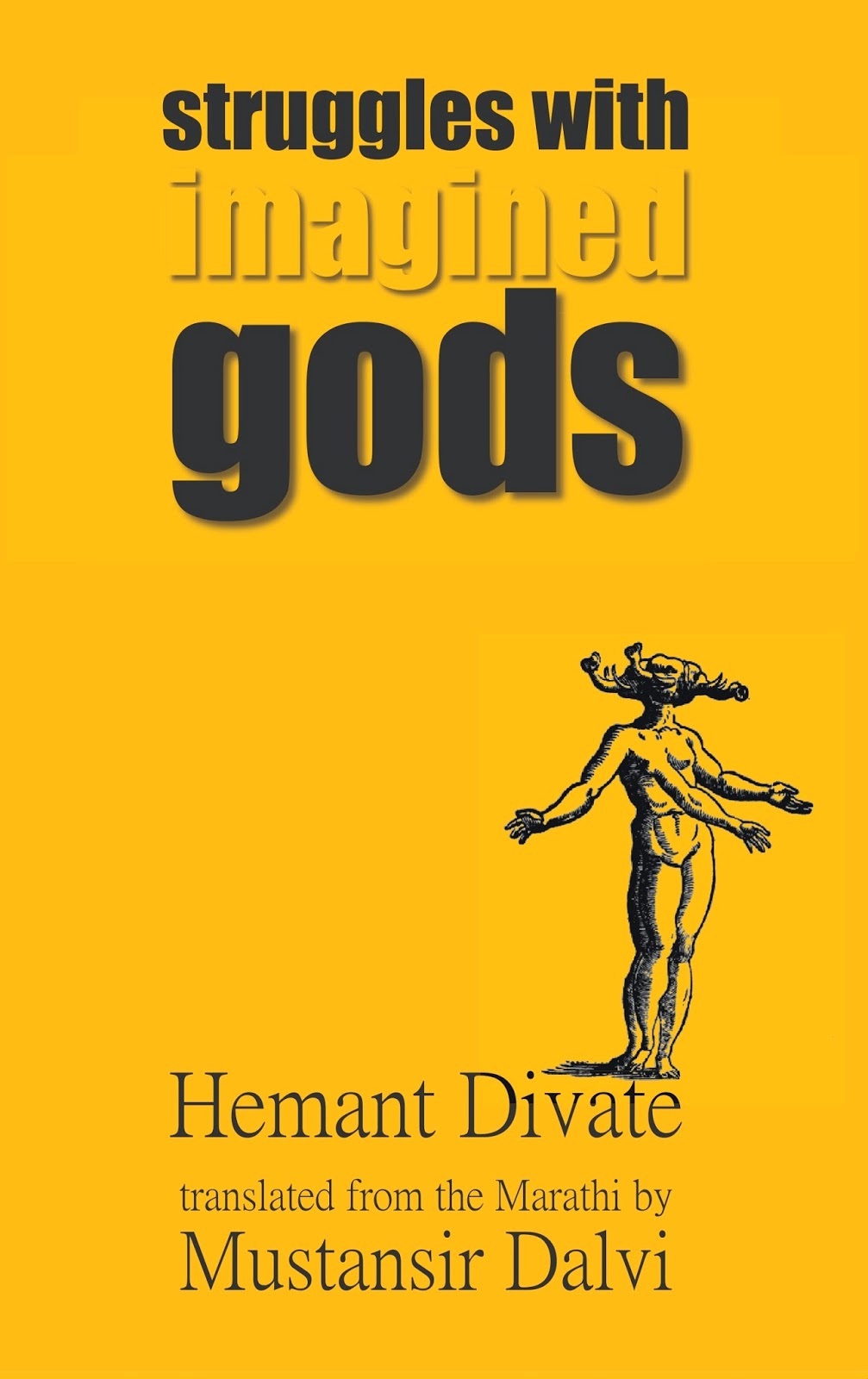 'struggles with imagined gods' in the press and media:
(click on titles)

A short review in
The Caravan: a journal of politics and culture
'What happened to the language' and other poems.

‘Hemant Divate writes of his world, of his everyday embedded-ment in it. A prisoner of his own reality, he is aware of his incarceration,’ notes poet-translator Mustansir Dalvi in a specially commissioned translator’s note; we carry extracts from Divate’s recent book Struggles with Imagined Gods. Divate is publisher of the often audacious imprint Poetrywala; his struggle against sentimental poetics and the shallowness of the post-globalized world is keen. Languages wear duplicities, delicacies and skins of time that reflect their philosophical strengths, street tenor and chaotic co-opted multilingual urgencies. Hemant Divate takes this between his teeth, ‘Poets have stopped/ writing in their own language/ and have, instead, begun/ grinding it down into finer and finer grain.// … languages change completely/ every twelve years./ Which means, after thirty-six years/ no language can remain our own.’

Dalvi’s translations are almost combative to contain the patois employed by this gritty poet. We sense his intelligence scanning possibilities before homing in. He writes, ‘[Divate] writes as he speaks, as is the wont of the Marathi manoos of Mumbai. The translations then, to stay authentic have to remain within the realm of the English speaking citizen of Mumbai, equally multilingual – one part Marathi, one part Bambaiyya and two parts everything else… Strange choices have to be made to make Divate’s Marathi poems into English poems.’

This is tough, high voltage stuff."

“Divate has an appetite for the contemporary, devouring both its poisons and its nourishments with gargantuan ease. A rich feast, but not for weak stomachs.”

"Like the surrealists he admires, Hemant Divate favors the trick mirror and the unsettling image, his work reminds us that modernism came to Marathi literature before it came to Indian writing in English"

“Hemant Divate existentialist ‘struggles with imagined gods’ depicts today’s Indian consumerist society as a meaningless/absurd world, filled with disoriented individuals. With colourful contrasts and his ironic, hallucinated and hectic writing-style, he swamps the reader, forcing self-examination. For this Marathi Sisyphus, poem titles are lower case letters; flattened like society is flattened before the illness of religions. Nostalgia is a refuge, but not a cure. ‘Struggles with imagined gods’ is another of Divate’s necessary contributions to contemporary Indian poetry.”

the fresh, juicy meat of a poem

A moment from life is stuck
between the teeth
of a poem.
It lingers in the interstices,
like scraps of meat
leftover, after chewing
on a chicken lollypop,
no different
from the space between two words
filled with the fresh, juicy meat of a poem.


what happened to language?

What happened to this free bird
who blew his whistle lustily during the jatra?
This brawling boy, who played appa–rappi
and cricket with a ball of rags? What happened?

The same boy, who spoke with his own friends later,
self-conscious of his obviously ghati tongue.
What happened to his language?
Kaay zhaala?


tell me when my number is called

So I was pushed
through some kind of machine.
A software was loaded into me, automatically.
How much space is left in my brain?
The reading says zero.

The technician said:
there’s no space in your brain for humanity,
all mind-space is completely full,
the brain has decayed through disuse,
whatever drive you open
is stuffed with brands.
Brand names, logos, and advertisements,
all nestle snugly into each other.
Naturally, you have lost
all awareness about life
In order to load some humanity back into you
shock treatment is necessary.

In this netherworld, I stand last in line
waiting for my number.
My number is the one after Yours.
Tell me when my number is called.

More poems from Struggles with imagined gods (published in Poetry at Sangam):
Mail Address
Flowers have Turned Brutish
Anything can Make your Blood Pressure Rise
Dreams while Shopping

what happened?
9. what happened to language?
10. flowers have turned brutish
11. funny mood
12. fuck me, if you can
13. brands surround them
14. New Age 1 2 3
15. dreams while shopping
16. here’s a long, winding, uneasy wall
17. anything can make your blood pressure rise
18. despite this, very timidly, he lives a good life
19. what is to be done about the axe embedded in the mind?
20. my struggle with an imagined god
21. tell me when my number is called
22. in Warsaw’s blue cemetery

The poems in this collection were first published in ‘Thambtach yet naahi’ (Abhidanantar, 2006) and ‘Hya room madhye aale ki life suru hote’ (Poetrywala, 2012). 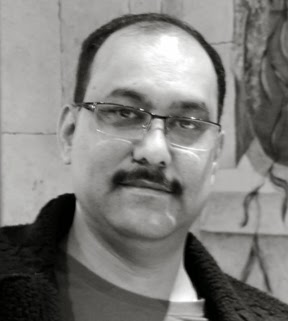 Hemant is the winner of the Bharatiya Bhasha Parishad Award (Kolkata, India) and the Maharashtra Foundation Award (USA). He is the first Indian poet to be honoured by the Costa Rican government, and his work is translated into Spanish and published as Alarma de Virus. This collection is also published in Irish, titled Foláireamh Víris.

Hemant lives and works in Mumbai. 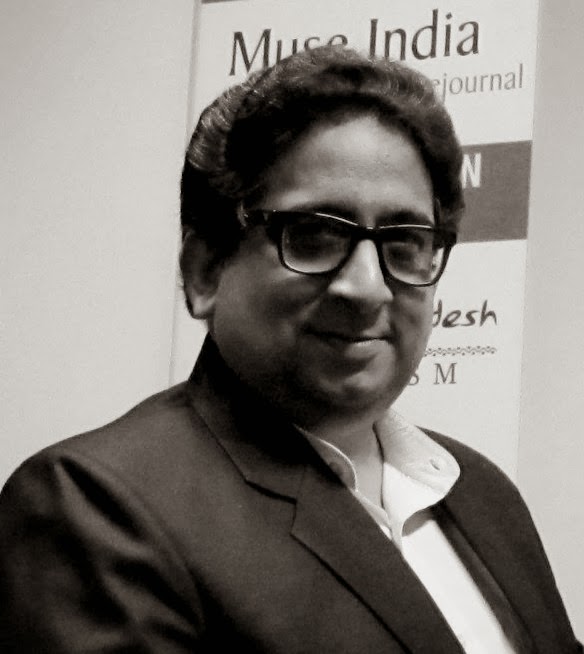 MUSTANSIR DALVI
Mustansir Dalvi was born in Bombay. He teaches architecture in Mumbai.

His poems are included in the anthologies These My Words: The Penguin Book of Indian Poetry (Eunice de Souza and Melanie Silgardo, editors), Mind Mutations (Sirrus Poe, editor), The Bigbridge Online Anthology of Contemporary Indian Poetry (Menka Shivdasani, editor), The Dance of the Peacock: An Anthology of English Poetry from India (Vivekanand Jha, editor) and in the forth coming Anthology of Poetry for Young People (Jane Bhandari and Anju Makhija, editors) from the Sahitya Akademi, Delhi.

Mustansir Dalvi's 2012 English translation of Muhammad Iqbal’s influential Shikwa and Jawaab-e-Shikwa from the Urdu as ‘Taking Issue and Allah’s Answer’ (Penguin Classics) has been described as ‘insolent and heretical’, while making Iqbal’s verse accessible to the modern reader.

'Brouhahas of Cocks' is his first book of poems in English, published by Poetrywala in 2013. 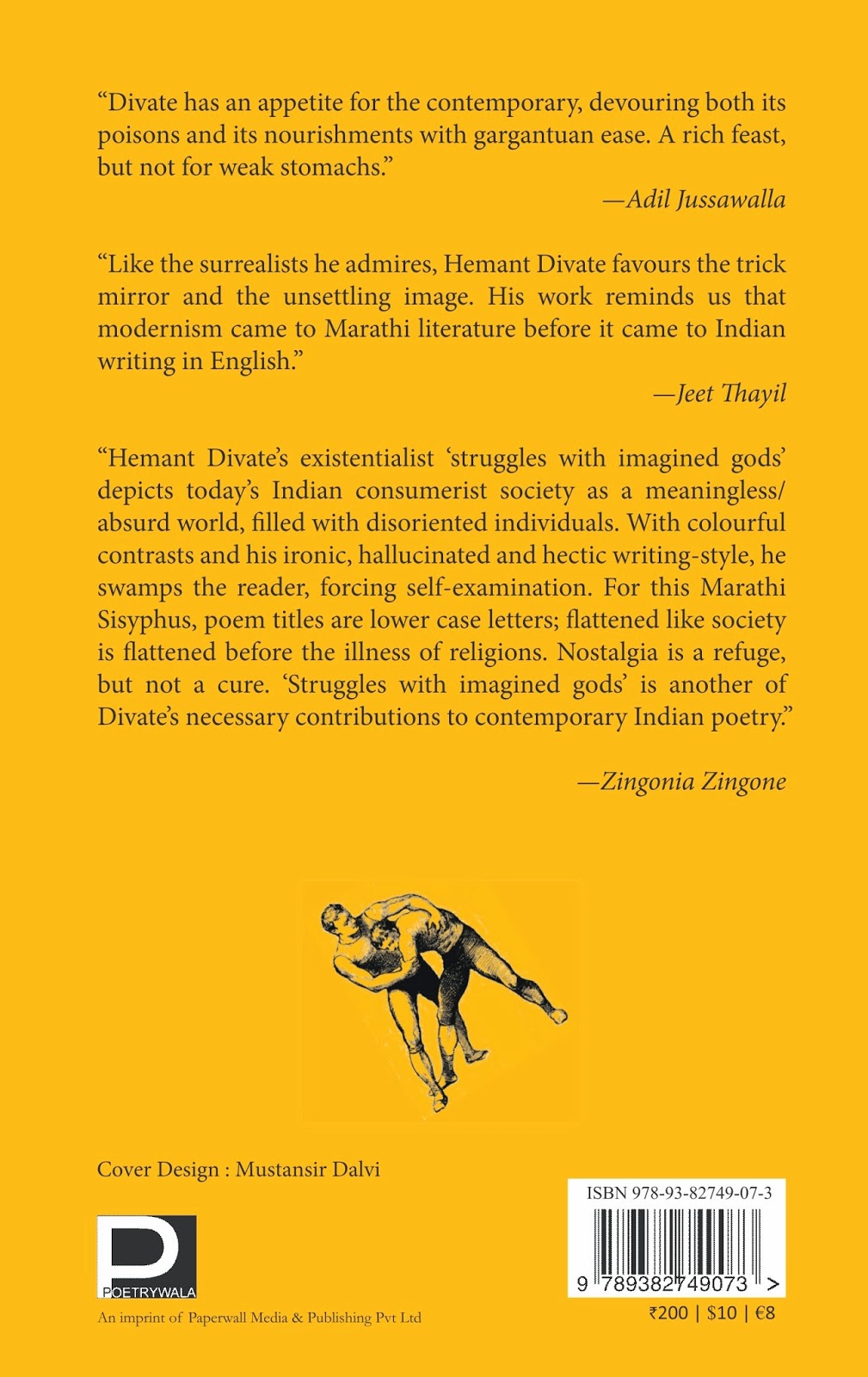 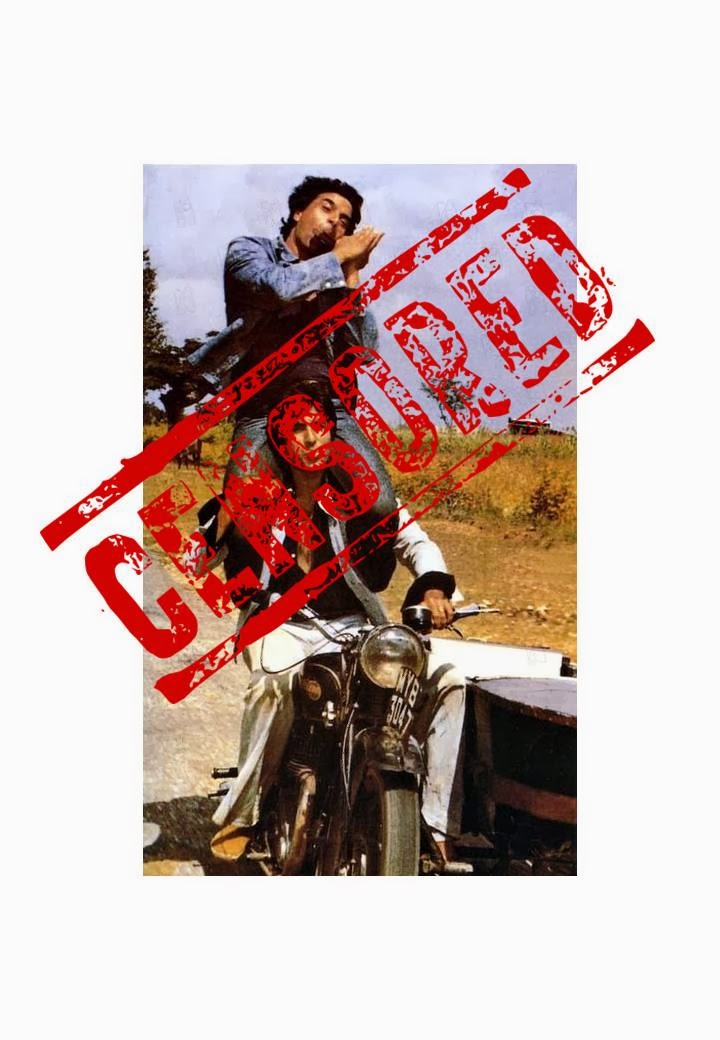 This piece appeared in an edited version in my 'After Words' column in Time Out Mumbai, February 2014

One of the first actions the new CEO of the Central Board of Film Certification has taken is to rollback all permissions granted to movies in the last few months on the grounds that the previous board was too permissive of objectionable content. One of them, ‘Sholay-3D’, was pinpointed for lacking seriousness in its content. The movie was screened in the presence of the CEO, his Board, his parents, his wife, her parents, his daughters, and their neighbors from the same floor. The following cuts and modifications to ‘Sholay-3D’ were demanded:

Vigilantism in all forms is disapproved, as when a currently serving policeman is commissioned by a retired Inspector to source delinquents to carry out encounters. The scene showing Thakur giving supari to Jai and Veeru should be removed.

All three coin tossing scenes to be excised as a British Raj coin is used in independent India. Also said coin was forged (heads on both sides).

The Inspector, shown sitting in the same space as two convicts in a goods train should be replaced with a havaldar. Also, when in uniform, the inspector should be addressed correctly as ‘Inspector Saab’ and not ‘Thakur’ (proper hierarchy must be followed).

Scenes showing Veeru running on tops of railway compartments should be deleted. This wrongly encourages rooftop travelling by children in suburban trains and violates several clauses of the Indian Railway Act.

The song ‘Yeh Dosti’ is to be entirely deleted for promoting cultural prurience. Far too much love and physical displays of affection are visible between two full-grown males. Not only do they hold hands but one actually mounts the other’s shoulders while riding a motorcycle. Sec 377 to be referred to, also traffic laws regarding reckless endangerment while riding a two wheeler. The board also found objectionable the lyrics that openly refer to same-sex love (‘aisa apna pyaar’, etc.)

Scenes of a widow turning off lights in the verandah outside her bedroom while another man ogles her while playing a mouth-organ were found to be too suggestive. The implied invitation to promiscuity cannot be overlooked. The scene of Radha handing over keys of father-in-law’s safe to criminals shows the Indian widow in poor character.

Russian roulette in Gabbar Singh’s introductory scene is of foreign origin. It is suggested that this be replaced with the Indian game of chausar. Firing bullets in the air is a waste of ordnance, an action not desirable in a developing country such as ours. Also, harvesting mangoes using guns is discouraged as it divests the unskilled unemployed of a proper day’s wages under NREGA.

All scenes of eve-teasing and physical proximity in song ‘Holi ke din’ should be removed. The producers are requested to see Barjatya’s wholesome films for positive influences.

The Board also frowns upon the excessive use of the Arabo-Turko-Persian vocabulary that permeates the entire movie, ignoring our homegrown Sanskritic heritage. To redress this, it is suggested that the following phrases be replaced-
‘yeh dosti’ by ‘yeh maitri’,
‘mehbooba’ by ‘premika’
and
‘kitne aadmi the?’ by ‘kitne purush the?’

Also, to avoid the issuance of an ‘A’ certificate, the following obscenities must mandatorily be replaced-
‘haramzaadae!’ by ‘dusht!’,
‘hijdon ki fauj’ by ‘ardha-nar sena’,
‘soovar ke bachchon’ by ‘murgi ke chooze’
and
‘chakki p*****g’ by ‘micturation’.

All lady members of the audience walked out during the ‘Mehbooba’ song, while covering the eyes of their young ones. Helen was not wearing skin-colored, full-body innerwear, as Sandhya and Vyjantimala have respectfully done in the past. Also physical thrustings of certain body parts in 3D to R D Burman’s rhythms were too much for older members of the board. On second thoughts, an ‘A’ certificate is unanimously advised.

Horses, poultry and insects were all harmed in this film. Such scenes should be replaced by CGI and a certificate to the effect should preface the main titles.

Depicting the surgical amputation of Thakur’s limbs is deemed unacceptable as the swords were not sterilized before the operation. Also Thakur was not put under general anesthesia by a qualified medical person. This encourages bad practices.

The use of spikes outside of a sport pitch can send wrong messages to school going children to wear them to classroom and home and should be replaced with sneakers (with the brand blurred). Also, stamping on someone’s palms with shoes on is against the Indian tradition of respect and humility. On the other hand, the Board commends the depiction of the ill-effects of dancing without shoes in public places.

The last scene of a man and a woman publicly embracing in a train compartment makes us hang our heads in shame. We condemn the previous Board for allowing such vulgarity to go though and recommend an enquiry (by appointing a retired judge) on their possibly mala-fide intentions of ruining the ethos of our great nation.