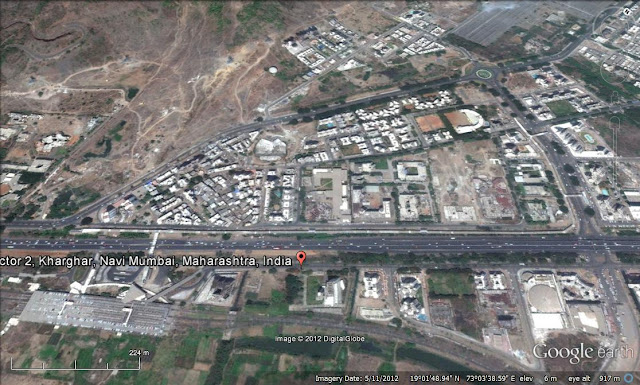 I pull up the Kharghar Skywalk on Google Earth. It was recently thrown open to public, after the inevitable delay for want of a suitable politician.

Touted as the longest skywalk in India, I measure with a divider (you know what that is) placed gingerly on my laptop. I mark off Kharghar Station; long enough for a 12 bogie train, and compare this with the skywalk. It is six times longer than the station, running a length of 5340 feet. Five times longer than the Eiffel Tower laid on its side and just about 500 feet shorter than the Golden Gate Bridge, here is a missed opportunity that I can only attribute to a certain laziness in doing a Google search.

Elevated walkways are not new to Mumbai. The foot-over bridge (paad-chaari pul) is the humble progenitor, and has been around since local trains gained custom. The new skywalks are most efficient when plugged into these venerable bridges, allowing commuters to cross above fast moving traffic that inevitably obstructs the fronts of stations. Both foot-overs and skywalks are meant to be perpendicular crossings over train tracks or over busy vehicular roads.

Consider this absurdity: at Kharghar, first one climbs down to a subway under the tracks, then one climbs up out of it, after which one trudges up 20 feet or so to the cable-stayed bridge that fords the fast flowing NH4. Then, this steel worm drags on and on for a kilometre and a half flanking the highway into Kharghar triumphantly upending at Utsav Chowk. What purpose does a long and winding skywalk serve parallel to a highway? Could there not have been a decent footpath instead, lined with shade giving trees and occasional park benches? Of course, but then it would not have cost Rs.36 crores. What’s the fun then?

Skywalks in Mumbai set the trend for running along existing footpaths. Much of the Bandra skywalk and the one at Cotton Green do this. So does the skywalk at Sion, disconnected from the station just a short distance away. The Ville Parle Skywalk runs for 1500 feet over the very road that accesses the station. There is duplication and redundancy to these costly urban interventions. Left to themselves, pedestrians choose the geodesic- the shortest line between any two points, accounting for local obstructions. These over time become common-law crossings. Urban planners call these ‘desire lines’.  Mumbaikars have a less highfaluting name - ‘short-cut’. We also use its opposite, one that nobody opts for, if avoidable- ‘long-cut’. That is what most of skywalks are, and that is why they fail. No one chooses a long-cut.

The long-cut is acutely felt in the climb up to these skywalks. Most decks are at a height of 18 feet, to account for container-trucks and double-decker buses. The MMRDA also acquiesced to the demand of Ganesh Mandals to raise the deck-heights along the processional paths by another three feet, making a climb of twenty feet or more. This means forty to fifty steps with two or three mid-landings before one reaches the deck. With neither elevators nor escalators, no wonder your grand-mum will prefer the risk of vehicular demise, and take the short-cut below.

The skywalk, emerges from some rather specious thinking about pedestrian benefit is an example of the vast and not so visible reclamation that has currently beset our city. Unlike before, when land was reclaimed from the sea, land is now reclaimed from land itself. All over the world, cities are being reclaimed for pedestrians- highways are reconsidered, subways are filled up, even train lines, as in New York’s High Line are redesigned as public spaces. In Mumbai, the powers that be come up with this: if you can’t clear a path, build one over it. Smart, no?

What is even smarter is the fringe benefit- spaces for rent. Not for accommodation, but for hoardings. Right from the first skywalk at Bandra, this was obvious. Today, benefits accrued from leasing out billboard real-estate come close to offsetting the costs of the skywalks themselves. Look at Kharghar again, with its 5340 feet running length. Now, multiply by two. What do you get? Chaandi.