On a recent visit to Goa, I had the opportunity of visiting a work in progress- a museum to house the works of the cartoonist Mario Miranda by the architect Gerard da Cunha. Apart from the delight of seeing a building at the bare bones stage (a delight for any architect, as any fule kno), it was the rekindling of association with the lines and forms, the crosshatching and the subtle colour infills of a cartoonist and illustrator whom people of my vintage 'grew up with'.
We knew Mario before we knew R.K. Laxman. Mario's illustrations filled our English textbooks- the venerable Bal Bharati. Right from 'This is Tim. This is Mini.' from Standard I to the later and deeper poems of Walter Scott (Kenilworth), we negotiated the byways of language mainly because of the illustrations that went with them. Mario could be funny, caricaturish but also dark and noirish as needed, and we absorbed this all. Mario's illustrations are now part of the visual vocabulary inside me and there is always a frisson, a kickback of nostalgia when I encounter (now rarely) his work.
His cartoons and illustrations were all around us too in the seventies and the eighties- mainly in the now defunct (and missed) Illustrated Weekly of India and several newspapers including the Times and Midday. These were of course contemporary and political, although Mario could, on occasion delight with full page spreads teeming with more characters that Michelangelo's Last Judgement but identifiable as people around us. Mario is from Goa, but for us Mario was quintessential Bombay- with buses, beggars, big bodied and bare bodied Bombayites teeming in Boribunder and Bhendi Bazaar. The word 'buxom' may have been coined specially for Mario's women- from the society ladies of Bombay to the fisherwomen of Goa- all bulging impossibly fore and aft. 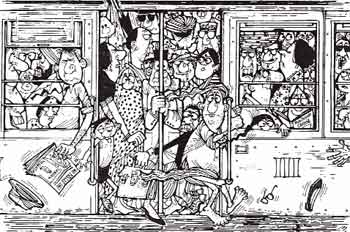 Although Gerard da Cunha's museum is yet to see a single drawing installed, the architect must be commended for the monumental archive of Mario's work he has put together for a single book- 'Mario de Miranda', published by Architecture Autonomous and Art India. It has over 2000 images of Mario's work (sadly no Bal Bharati reprints though) from all the decades of his active life and it is a delight to possess. I have been immersed in it for the past few days and have no immediate need to emerge from it sometime soon. I can heartily recommend this book to anyone who knows his work (or doesn't).

Mario's work is also an architect's delight. In his later illustrations are single drawings of Goa, New York, Paris and Portugal, detailed and evocative of both time and place. Mario's work put together is a sociological document of many decades of work. You only need to see the New York suite to know that this is the city from the early Scorsese/Taxi Driver days and not the post Giuliani/post9/11 present. 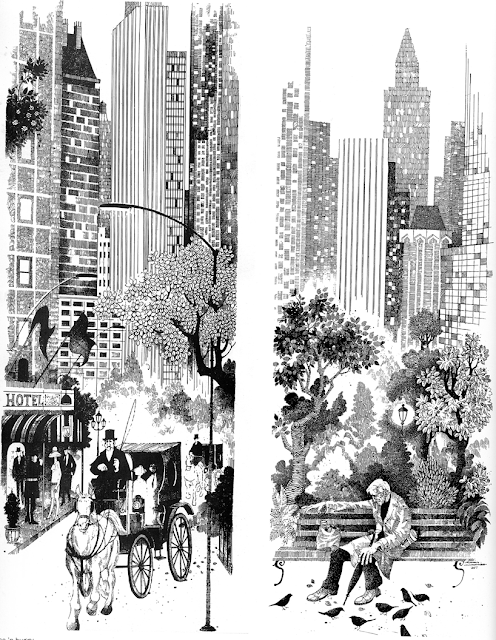 Gerard da Cunha has also put an extensive exhibition of Mario's ouvre in the Cymroza, which I have yet to
see. Fortunately it is still up for a few more days.

...and in the end the memories of the Bal Bharati days still most vivid are Mario's renderings of hands- open and clasped, fingers extended and expressive, that speak to me across the years. Yes, they are all there in the book and are as evocative as I remember them. 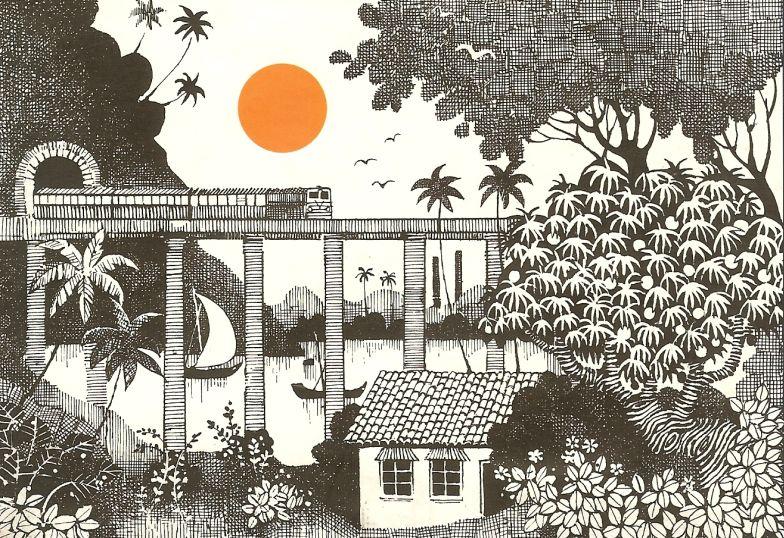 The illustration by Mario displayed here is of the coming of the Konkan railway-
a wish fulfilling event about a decade ago for most of its denizens.
Posted by as any fule kno at 12:57 AM

Sir,
Its nice to know about mario mirandas work from you.

Each line of his sketch speaks about itself its context. The character within moves swiftly in form of lines, and creates magic.

I loved goa more because of marios characters.
and loved even more to observe it live.

We are great fans too...
Read this one from our blog:
http://aniamit.blogspot.com/2006/02/mario-and-secret-of-undying-memory.html
and this too:
http://drawn.ca/2007/09/04/mario-miranda/
I just got gifted the big fat Mario book today! I found an old old copy of his fantastic Goa book and three small children's books from the raddiwala in King's Circle. The kiddie books aren't there in the book as far as I can see...that is saying something!
Amit

I read this Bal bharti book with Mini and Tim in 1970, do you have a copy somewhere? I still remember the story of "Hans and the Mountains" from it. thank you sir.
Amrita

It is because of the cartoons by Mario that we could identify with the characters in the Bal Bharati lessons and poems.

And now he's gone. Had the honour of visiting him at his home in Goa two years ago. Truly a great man.

Does anybody have a print or soft copy of the Nitin Leena Hasan pages if the balbharati? I've been looking for years and also contacted Gérard but no luck. Those 3 pages are a quintessential memory of my first attempt at reading. Pls let me know if anyone can get those three pages. Thank you. Shabbir.

any luck. i really want to share it with my baby girl.

Searching for the same,
Rajesh Pai