This piece appeared in a slightly edited version in my 'After Words' column in Time Out Mumbai,  August 2013. 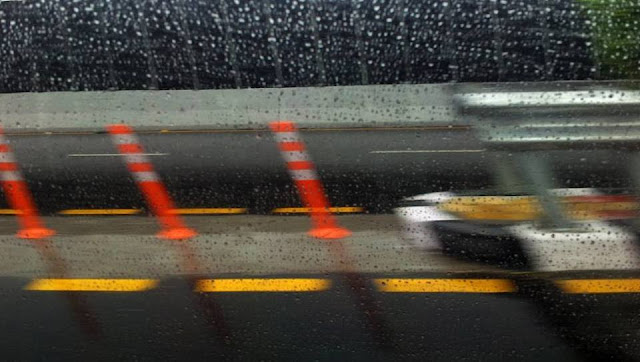 Free Ride
The newly opened Eastern Freeway has been the flavour of the season. Firstly, because of the knife through- butter smoothness by which the 17 km from Chembur to Orange Gate can be negotiated (12 minutes), and secondly, because the average Mumbaikar in a car cannot believe that the freeway is, in fact, free. There has been some talk about the usual suspects feeling awkward about appending the term, “Mukt Marg” to the names of their heroes. I offer my own, in recompense. It is a sentiment many readers of this column would echo, I am sure.

A third reason that gives cheer is the access the freeway provides to the many views of the city from an elevated position, especially those of the eastern edge, hidden for decades behind the foreboding walls of the docks all along PD’Mello Road. Looking to the left while cruising towards South Bombay several versions of dystopian wasteland emerge, even as the sun rises from behind the mud flats, former salt pans and mangroves. Electric pylons punctuate this bleak nothingness we have been prevented from observing due to a specious sense of security. The pencil-like chimneys belching flames, dah-dit-dah as if in Morse from the refineries bring to mind the Los Angeles’ apocalyptic future landscapes from Blade Runner.

Then, just when it gets interesting and we anticipate a bird’s-eye view of the Ferry Wharf, tall grey barriers rise from the verge to remind us that you, the citizen, are much too infantile to be allowed to see Mumbai’s historic maritime infrastructure.You turn to the right, and sloping Mangalore tile roofs foreground the skyline of emerging new skyscrapers. You pass a hill called Antop, rue the diminishing greens of Parel and as the freeway winds down you meet the city at Carnac Bridge, old Bombay’s dockland heritage.

This little peek at the eastern beyond was impossible for all these years. This edge of the island city lies slit like a sliver, separated from the rest by a tall wall that hides the docklands from prying eyes. Beyond these walls lies the first manor house the Portuguese built, the singed memory of the Fort Stikine disaster, the pier from whence a million émigrés left to better lives in other countries, the same pier that Gandhi returned to a rousing welcome. Why is that wall still standing?

Now that the bulk of shipping cargo has moved to the JNPT, why can’t this, almost 15 km long stretch be returned to the city? Here is an opportunity for urban transformation far beyond that of the erstwhile mill lands. These seem to have had their time in the early 2000s and have exhausted their urban potential in a morass of contested tenures and exploitative real estate. On the other hand, this long piece of Mumbai straddles the natural harbour that enticed the British in the first place to put down roots, to relocate from Surat. East of the freeway and PD’Mello Road lies Mumbai’s final frontier that can become a potentially new dimension to city occupation. If the obsession with keeping the docklands sanitized can be overcome, the Mumbaikar can get first dibs on the edge that, with good urban planning can allow for a melange of waterfront activities the length of the city itself can be released. The hardworking Bhaucha Dhakka and the largely hidden Kala Bandar that bookend the docklands themselves can be refurbished with plazas, boardwalks and cafes, evening events and fireworks.

The Eastern Freeway is also the perfect bypass to the older choked north-south arteries of the city. The efficiency of traffic movement (current congestion at both ends notwithstanding) also shows up the redundancy of a lot of earlier infrastructure, especially the multitude of flyovers built since the 1990s. They were built for the same reason that the Freeway serves today, to bring in more and more vehicles into the southern parts, only piecemeal. What is their worth today, now that this alternative is available?

Anyone can see that the presence of flyovers in the city benefits only the fast moving traffic above it. Below the flyovers lie the detritus of the city, those neglected parts that are a mulch of garbage, dead vehicles, opportunistic pay and- park operators and general illegal occupation. In the process, flyovers destroyed the vibrant street life of several of Mumbai’s busiest streets and gardens, just look at Mohammed Ali Road or King’s Circle today. The freeway should be just the excuse for reclaiming street life by removing the redundant flyovers and allowing the sun once again to fall on the streets below. Let us start with dismantling the JJ Flyover, that long and unnecessary tapeworm, and then, one by one, work our way northwards.
Posted by as any fule kno at 10:04 AM No comments: