The Architect's Alphabet by Rudyard Kipling 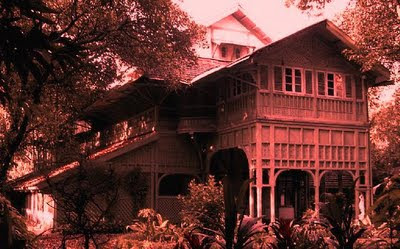 The Dean's bungalow at the School of Art Campus in Bombay, in which Rudyard Kipling was not born.
The Architect's Alphabet
by
Rudyard Kipling

A was an Architect: B were his Brains
C was the Chaos he wrought when he used 'em
D was the Dissolute course of his Drains
E was the End of the people who used 'em
F were the Fools who allowed him to build
G were his Gehennas of brickbats and lime
H were his houses, bacteria filled
I am the poet who left them in time
J were his Joists- but they broke with the rats on 'em
K were his Kements (I adhere to this spelling)
L were his Leadings- you couldn't swing cats on 'em
M was the Mildew that clove to each dwelling
N was his Notion of saving expense
O were the Odds it would cost like all Tophet
P (please insert for the sake of the sense)
Q were his Quantities, P was his Profit
R were his Roofs which were waterlogged rafts
S for they Sagged (S is also his Sinks)
T the Tornadoes he told us were draughts
U were his Usual Unspecified Stinks
V was the Vengeance I vowed on the head of him
W was Wrong and Waiting and Waste
X is King Xerexes (God knows I have need of him!,
Y and a Yataghan wielded with taste)
Z are Zymotic diseases, a host of 'em
Ambo's my architect, I have got most of 'em.

A poem written by Rudyard Kipling in the 1890s in the margin of a notebook belonging to architect Sir Herbert Baker. 'Ambo' is Ambrose Poynter, an architect, cousin and friend of Kipling. Obviously, Kipling was less than satisfied with his work.

This unpublished poem was discovered in 1968 by the anthologist Kenneth Baker.

I acknowledge the wonderful book 'The Art of Looking Sideways'by Alan Fletcher (Phaidon Press) as the source.

Why don't we do it in the road?


2.
"I think of the postmodern attitude as that of a man who loves a very cultivated woman and knows that he cannot say to her ‘I love you madly’, because he knows that she knows (and that she knows he knows) that these words have already been written by Barbara Cartland. Still, there is a solution. He can say ‘As Barbara Cartland would put it, I love you madly’. At this point, having avoided false innocence, having said clearly that it is no longer possible to speak innocently, he will nevertheless have said what he wanted to say to the woman: that he loves her in an age of lost innocence. If the woman goes along with this, she will have received a declaration of love all the same.

"Neither of the two speakers will feel innocent, both will have accepted the challenge of the past, of the already said, which cannot be eliminated; both will consciously and with pleasure play the game of irony… But both will have succeeded, once again, in speaking of love.”
(Umberto Eco, Postscript to the Name of the Rose)


3.
6.30pm at Bombay VT Station. Platform 1. The Harbour line.
It is the cusp before full-blown rush hour. A young couple, uncharacteristically entwined, walk the length of the platform towards where the first class compartments would arrive. The boy, almost all in black, encircles the girls waist with one arm. The girl is slim and short, a petiteness further enhanced by a really tight pair of jeans and a top that fits only too well, has, over one shoulder a biggish ladies bag with several dangly bits. She wears fashionable heels, giving her an inch or two. With her free arm she clinches the boy back, tightly. It is unusual to see such a public display of affection, especially in a railway station in the evening.

The boy can only see her eyes.
The girl’s face and hair are obscured, wrapped completely, a dark dupatta forming a very makeshift naqaab. Both are engrossed; they bill and coo to each other as they wait for the train. Soon, the Vashi train trundles in, quite on time. The girl raises her head and gives the boy a peck on his cheek, right through the dupatta. The boy disentangles himself and gets into the general compartment. The girl walks a few steps down to the Ladies First Class.

Even before she finds a place to sit, with one smooth motion, she whips away the dupatta from her face, her hair falls to her shoulders, and once again she becomes Everywoman.

Bombay, or what’s left of it 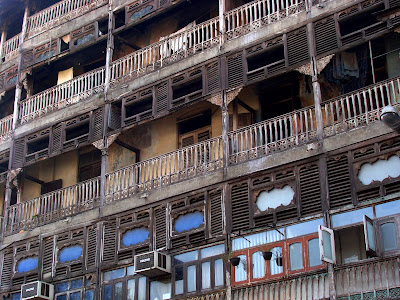 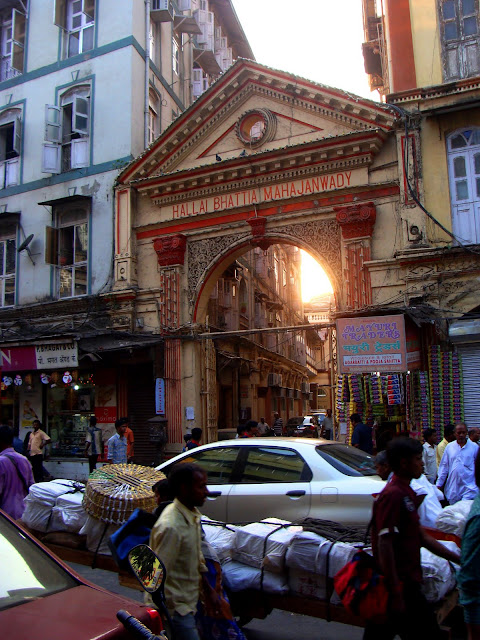 Preserve Urban Memory- the fabric of the inner city
We live in a city of history, of onion layers of memory. These layers allow us to take the city for granted. That is as it should be, for knowledge leads to ‘ownership’ that ensures a sense of well being in the city. Any rebuilding must preserve erstwhile (names and) footprints, and the street character layout, complementing the essentially pedestrian nature of inner city streets. Any sensitive reconstruction must display an appreciation of heritage and its effective conservation; most importantly preserve egalitarian nature of the inner city. There is a city beyond that the eyes can see. It is intangible and it is vast. It is as Whitman describes himself, full of contradictions: ‘I am large, I contain multitudes’.
World over, inner cities age and ripen with the respect and care of its inhabitants. Our inner cities are older than most, yet most alike in form and character. They define , or what’s left of it. Let us leave some parts of the city free from the jackboot stomp of the speculator and accept that its residents are capable of determining its place in the new order. Unrealistic individual aspiration leads to a clamour for perceived rights, without accounting for responsibilities that come with it. If each one does not return to the city rather than merely take, we all stand diminished. We are, in a sense our own worst enemy.
Posted by as any fule kno at 12:13 AM No comments: