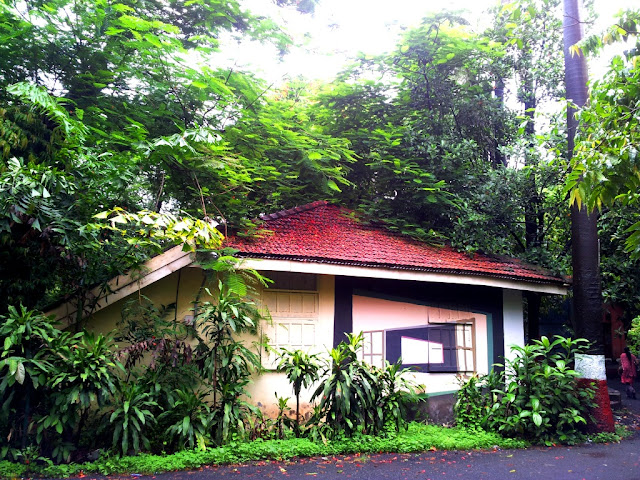 For entirely personal reasons, I watch 'Mahek Bhi' from Sachin Kundalkar's 'Aiyya'. This song has Rani Mukerji olfactory-trolling some guy called Prithviraj and is filmed entirely in the Sir JJ School of Art Campus, which is where I have my day job. Such moments resonate painfully for me, as I take my workplace for granted sometimes, even one of such beauty and historicity. ‘Mahek’ makes the campus look breathtakingly lovely (which it is) but also highlights just how fragile this place has become.

The art campus is both an anachronism in our post-planning present as well as a harbinger of how our city could be. The erstwhile Bombay School of Art & Industry was set up by Sir Jamshedjee Jeejeebhoy who presented the Government of Bombay one lakh rupees in the early 1850s for a school to train ‘natives’ to preserve and develop their local crafts. The Government in turn granted the school some 'largely forested' land, just outside the fort walls, which were being dismantled to create the Urbs Prima.

Instead of native crafts, its founding fathers Terry, Griffiths and Kipling, all outsourced from England, would impart lessons in the Beaux-Arts. Thus would the school make a significant and physical impact on the city. Almost all the ornamentation on Bombay’s late 19th century buildings is created by the school, particularly under Lockwood Kipling. The impact of the Ajanta frescos worldwide was the result of a decade-long documentation by Griffiths and his students. For a while, the school produced the most sought-after pottery in the Empire- Bombay Pottery or ‘Terryware’. Its fecund soil even produced a man of letters: Rudyard Kipling, born somewhere on the campus in 1865.

While rarely regarded today (except for film shoots) the campus is an urban treasure. These two and a half acres are, in this mad city, a haven of quietude; its buildings and foliage insulate both noise and blight outside. Several trees predate the campus are now a venerable century and a half old. Many have fallen in monsoons past, never to be replaced. Here is a place pining for an environmental audit, for, like Jijamata Udyan, the campus hosts significant flora and fauna (especially bats). Its buildings too, never considered worthy of heritage walkabouts, are built in several styles, Neo-Gothic, Neo-Classical, eclectic and bungalow style, all more or less contemporaneous. Can you think of another place in Mumbai where the newest building on campus is dated 1957?

The campus has benefited from not being in the public eye, especially in an administrative environment that treats urban heritage as potential for redevelopment. Time, however, has not been kind to its buildings and grounds. Apart from Abha Lambah’s conservation of the Fine Arts building (1878), the rest of its edifices are under the benefaction of the state PWD. The college of architecture by George Wittet (1910) and the institute of applied art (1886) by Mancherjee Marzban, Bombay's first ‘Native’ architect are in need of expert conservation.

Then of course, there is the gem of the campus, the Dean's Residence, a timber framed structure from the 1880s with its wraparound verandahs and sensitive detailing. The building is now (and forever) associated with the eponymous Rudyard, who is commemorated in its porch with bust and plaque. Occasionally in the limelight for the wrong reasons, the wooden bungalow is most vulnerable, yet one with the best potential to be an archive. The century old artefacts of the campus’ three schools could not find a more fitting home.

Worst of all, the arts campus is almost devoid of security, its gates are thoroughfare for all and sundry crossing over from Crawford Market to Dhobi Talao. Even its garbage bins are used by neighbourhood restaurants to dump waste. For the present, the campus can absorb the many indignities heaped upon it, but it is close to a tipping point. For its handpicked students, who will be the vanguard of Mumbai’s liberal humanist future and for Mumbai itself, the Sir JJ School of Art campus deserves more than finding solace as a backdrop for Rani Mukerji.