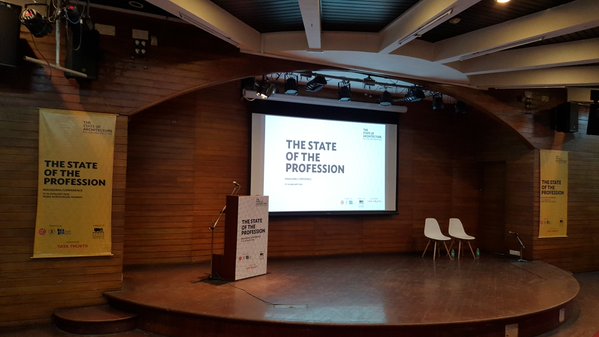 The inaugural conference of ‘The State of Architecture’ exhibition (currently on at the NGMA, Mumbai, curated by Rahul Mehrotra, Ranjit Hoskote and Kaiwan Mehta) called ‘The State of the Profession’ achieved the objective set out by Kaiwan Mehta in his opening remarks: ‘Historicize and Problematize’. In doing so several affirmative readings were possible about the state of architecture in India today. The conference covered the profession, practice, education, criticism and institutions. Here are some larger impressions that remained with me:

The profession of architecture, if seen as a collective set of ideals, is difficult to pin down. At one level this is the consequence of the diversity of practice that is now increasingly prevalent. Yet at another, this difficulty may be attributed to the lack of ‘communities of judgment’, to use an evocative phrase by Pratap Bhanu Mehta, who gave the conference’s keynote address, among architects in the country. Looking towards ‘institutional’ definitions does not seem to help, as institutions too, in a sense are ensconced in silos of their own making.

The choices made by several architects who spoke at the conference present (rather than represent) the ‘problematization’ of the profession and the fuzzy presence of the professional. This conference brought together such professionals whose practices are essentially reflexive, rather than located in the self-confident comfort zone of the mainstream. For what it is worth, this too can be attributed to the impotence of regulatory mechanisms or the community’s own unwillingness to introspect as a collective. Questions were raised, but it will be some time before definite readings are possible.

The practice of architecture in India, since the millennium, seems to have grown richer by moving outside of the mainstream. It is not the diversity of practices that are the most revelatory (although that is important) but the diversity within individual practice. The embracing of multiple disciplines, media, collaborations and muses have resulted in a variety of ‘messy practices’, reflecting the ‘punctuated chaos’ (to quote Bill Gates) that we find ourselves in currently. This can only be a good thing. The feedback loop between thinking and doing gushes like a cataract in some practices. In many cases, these practices cater to the same patrons as that of the mainstream, indicating a more enlightened patronage and a greater sense of collegiality and synthesis.

On the other hand some practices, co-create with end users, bringing themselves in direct contact with the communities they design for, even searching out communities not catered to by architects so far. Several practices reach out to the marginalized- slum inhabitants, those living in tribal or rural areas located far away from transport streams. These architects subsume their expressions into those of their constituents, and even encourage the users to express themselves in the built form. There is an embedded-ness of the crafts-person in the design process. This does hark back to the pre-modernist practices in the country before technology got valorized at the expense of the indigenous crafts tradition.

The state of architectural education is particularly problematic. It should have been an article of faith that schools of architecture were the laboratories that informed architectural practice. This does not seem to be happening. Education is overwhelmed by numbers. One of the unique features of this exhibition is the location of architecture within the larger eco-system of education, criticism, location and institutions. What emerges is that from 2015 onward, more than 25,000 students will graduate from the 450 odd architecture schools in the country. This is a number greater than the number of practicing architects in the country. This begs the question- who are the teachers, and what is the nature of learning in these many schools? How may quality or innovation or farsightedness be possible in this proliferation?

Curricula too, are largely prescriptive, where under the rubric of a single university, may cater to the lowest common denominator. The roles of both students and teachers of architecture have to be re-examined in the light of fast and easily available information. The top down didactic and ‘expert’ supervisory approaches seem to have lost their relevance. The teacher has to be reimagined as an ongoing learner and co-create with the student. There are few stand-alone schools in this country who may chart their own course. A clear call was made in the conference for a syllabus that was more flexible and less prescriptive, less of a cookie-cutter, one size fits all templates. Here, the diversity of practices can provide role models, and be muse to architectural education rather than the other way around.

The role of institutions that oversee the profession was perhaps the most problematic. The governing institutions mandated to look after the interest of architects and to regulate practices and provide codes of conduct under which practices could flourish seemed to present a monocular gaze, more at ease with the mainstream sense of the profession. Laboring under self-perpetuating myths of their own presence, they presented a stance of protectionism and definition. The current positions of institutions comes across as largely reactionary- expressing fears of encroachment by ‘others’- by engineers, by ‘non-architects’ of various stripes, by foreign firms, by project managers. In the affirmative universe of collaboration and multi-disciplinarity they seem to write themselves out by focusing too much on who should be an architect and who should not.

While it was readily accepted in the conference that architects as a whole in the county influence a relatively small amount of actual building, the vast majority of building still happens outside the pale of institutional memberships. The institutions themselves did not seem to accommodate this reality in a worldview largely oriented towards building memberships and corpuses.

In both the exhibition and the conference, the state of criticism in the country was historicized perhaps for the first time . Architectural writing and critical self-examination is only now emerging, and its influence is far from clear. More books on Indian architecture are being written, but not enough on contemporary concerns and challenges. Like reflexive practices, we need more of reflexive criticism whether in books or journals. Journals such as that of the Indian Institute of Architects have excellent archival value, particularly from its early decades, but do not provide critical writing. Other magazines that have emerged since the turn of the century largely valorize and commemorate the boutique practices and showcase architects in their very limited roles as lifestyle designers.

There is also a dearth of academic writing on architecture because of the absence of peer-reviewed journals on architecture. In the last couple of years some journals have been established but their value shall only be seen in their sustainability.

If one had to rank the various states of architecture in India based on the deliberations and the initial viewing of the exhibition, the practices in constant dialogue with themselves and their larger environment are the most encouraging. The profession is being redefined by these practices and has a potential to influence education and criticism. There have to have a larger presence on the cultural consciousness of the country for lasting value, much beyond the confines of this conference. Architectural journalism still has to take off to meet these practices half-way and become the critical carriers of potential.  Architectural education has to resume its role as producer of ideas and alternatives that can be fructified in practice. The institutions that govern architecture need deep self-examination as to their present and future relevance.

One issue undiscussed in most part was the location of the Indian architect in a stage larger than the local. Perhaps the valedictory conference that focuses on architecture in South Asia will pick up the gauntlet.