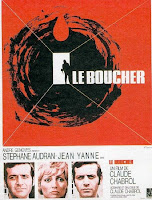 I watched this film in blurry black and white on Bombay Doordarshan. This was a time of fledgling programming by Bombay's only television channel, leading to its golden age in the mid-seventies. Foreign films were a weekly staple, as I remember, under the program head of 'Montage'. For me though, looking back now, Chabrol's film was one of many firsts: it was my first introduction to world cinema, it was my first sub-titled film (something I unquestioningly accepted as normal) and it was my first serial killer movie.

Of course, what stood out for me was the last bit. As kids we were all brought up on a bloody diet of killing, murder, bloodshed, what have you... you know the wholesomeness of growing up, none of the namby-pamby stuff.

One scene in the movie stood out, clearly imprinting in my memory. I have recalled it many times since, I must have been pleasantly traumatized by it. A schoolteacher takes a bunch of children out on a picnic to a cave site in the hills. They sit by a stone ledge and open their sandwiches. One little girl open her buttered sandwich and exclaims 'Its raining!' The teacher says 'It's not raining.' The girl cries out 'But its red!' and looks up. A bloody female hand with freshly dripping blood pokes over the ledge. Everyone screams. Oh, how we loved watching this then, a bunch of kids in our neighbor's home (the only television set in the area at that time) and replayed it over and over in our heads and in our games. Drops of blood being an index for murder is a corny cliche today, but for us kids it was an affirmation of our own imaginations and fears.

By this time of course I had had my fill of horror stories and horror movies (only through books and magazines, trawling the depths of Poona's British Council Library, where I practically grew up). A particular favorite was the Encyclopedia of Horror Film and Cinefantastique (full of pictures, both scary and naughty-that's where I discovered King Kong, Godzilla, Dracula, Boris Karloff, Bela Lugosi, Vincent Price, Frankenstein, the Mummy, the Creature from the Black Lagoon, The House of Wax, the Thing, the Blob, and everything undead), and of course the monthly Films and Filming magazine that I could never get enough of. Watching these actual movies would come much, much later. No, I consumed texts, still images and above all movie posters, lurid marquees in books and magazines and outside on all the cinema theaters I passed everyday in our school-bus on our way to school, fueling fantasies and populating the visual libraries in my head.

Chabrol, of course, I saw for the first and only time time that evening in the mid 70s. I found the scene again today, after nearly 40 years, and in glorious color here. And yes, the scene played put pretty much as I remembered it. Amazing, how I must have internalised the whole thing. A few years later, still a kid, I wrote a murrrderrr ishtory of my own called 'Whatever happened to Aunt Alice?' full of killing and assorted bunkum, where the first clue to a possible doing-in were three drops of blood on a bedsheet. Yes, yes, I did Google the title today to find that it was a film made in 1969, and I must have seen the title somewhere, what did I know? Plagiarism does not exist when you are ten. I must have seen the poster on the right, it has a gory familiarity, the blood is just about right. Also, this just occurred to me: the image of the bloody hand on the DVD box mirrors the hand in Le Boucher. Some amazing triangulation happening here, both inside my head and outside of it.

But of this I am sure of:
when those drops fell on the little girl's open buttered sandwich, I saw them fall in red.
Posted by as any fule kno at 11:29 PM No comments: